This Car Review Is About: SsangYong’s Tivoli. SsangYong is the quiet third of a three tier car making setup from Korea. Nestled well below Hyundai and Kia, SsangYong currently have a three model range, and the Tivoli is the entry level to the brand. The Tivoli itself is based on the Kia Soul and is badged as EX, ELX, and Ultimate.
The ELX is a solid mid-level competitor in a very crowded market. Being based on the quirky looking Soul isn’t a bad thing either. SsangYong’s designers have done a good job of hiding the relationship with a heavily reworked interior and exterior. There’s no hiding that steeply raked windscreen though.

Power Comes From: Behind the bluff and upright schnozz that hides a diesel or petrol powerplant. Our test car had the 1.6L diesel, a slightly chattery but butter smooth item. There’s a huge 300Nm of torque on tap between 1,500rpm and 2,500rpm. Peak power is just 85kW and is available from 3,400rpm to 4,000rpm. The diesel comes in 2WD or AWD for the Ultimate, and is a six speed auto only for the oiler. Economy is, unsurprisingly, pretty good for the pert little five door. Urban driving is quoted as 7.4L/100km for the 2WD version. We saw a best of 7.6L/100km in the urban cycle. Combined is 5.5L/100km and that’s without the realms of possibility. Tank size compromises range though, at just 47-L.

What’s It Cost?: The range starts at a miserly $22,990 driveaway for the EX, without premium paint. It’s $27,990 driveaway for the ELX diesel auto, with premium paint an extra $495. Outside one can choose six colours, the test car was Space Black. Inside there are three choices with black overall, brown (mocha coffee shade), and beige. The trim is on the seats and the doors.

What Does It Look Like?: Overall, the presence is restrained from the outside, innocuous even. The front end is very SsangYong family in look, with LED eyebrow driving lights in a swept back cluster design. The lower air intake surround is a horizontal “double Y” with black urethane underneath joining the front and rear. The tail end itself is a look that evokes the MINI Countryman’s styling and a bold C pillar joins the top to the bottom.

It’s compact in size to look at. Length is 4,202mm, height is 1,600mm with roof rails, and overall width is 1,798mm. What these numbers mean is good interior space for the 1,480kg (dry) Tivoli.
There’s some good looks inside too. The dash is the current Euro themed arch-type sweep from door top to door top and in the black-on-black it looks ok. The dash’s look is a mix of black textured plastics. There is a faux stitched look, a hood style binnacle, and piano black centre stack.

This holds the aircon controls which are soft-touch buttons. An old-school amber backlit display screen sits above a dominant fan speed dial. Unlike most other manufacturers, SsangYong haven’t gone down the path of a standalone touchscreen for the audio/satnav, with the Korean make staying with an embedded look here. Again there is no DAB and that peculiar predilection to have one radio station sound like a skipping record. 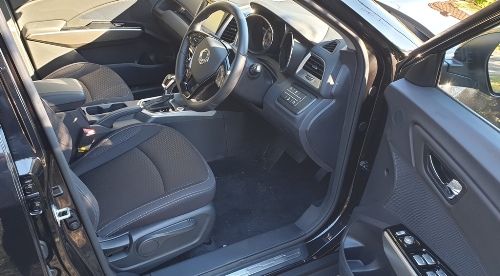 The driver faces a binnacle that has bright red backlit dials. These can be changed to five other backlights such as blue and yellow for that extra bit of personalisation. A monochrome centre screen shows wheel angle when parked. This is presumably to remind a driver which way they’re pointing when getting ready to move on.
Splashes of alloy look plastic add some colour to the black trimmed option. The seats are comfortable and not heated or vented in the ELX.

There’s the usual apps for the sound system, storage spaces front and rear, and a good amount of cargo space at the rear. There is a pair of 12V sockets, one up front and one for the rear.
Safety is high. AEB is standard, as are warning systems for forward collision and lane keeping. Australia doesn’t get the Euro spec traffic sign recognition system…yet.

What’s It Go Like?
It’s a hoot to punt around. There’s the barest hint of hesitation in the diesel from a standing start. The turbo very quickly spools up and there’s a rapid, smooth, but slightly noisy launch. The engine is a real old-school chatterer under load but there is no sense of vibration is any form. The gearbox is the same. It’s super quiet, super smooth, and rarely proved indecisive in its cog-swapping.

Off the throttle the engine is whisper quiet. There is a minimal amount of road and wind noise whilst coasting, and it’s again only when the go pedal gets the ask that the engine gets noticed. Mid range urge is sensational given the size of the engine. It’s relatively effortless in how it performs when compared to bigger cars with bigger engines. Ride is on the hard side however. The 205/60/16 from Kumho provide plenty of grip but that highish sidewall doesn’t do much in the way of aiding the suspension’s absorption. The spring and damper rates are almost adequate for smaller bumps but hit a traffic calmer at anything other than walking pace and it’s kapow.

The rear corners will even “cock a leg” when in tight turns or at odd angles coming in and off some driveways. The upside is how it goes on the freeways. Undulating surfaces don’t exist, stability is high in windy conditions, and the steering, adjustable via a drive mode button, is well weighted. It’s responsive and ratioed so understeer is also kept to a minimum. As a driving package it’s far better than expected.
Warranty Is? Seven years. That’s also with unlimited kilometres, from front to rear. Srvices are 12 months or 15,000 kilometres.

At The End Of the Drive: It’s a real shame that this quiet achiever is due to be discontinued. Although the forthcoming Korando promises to be just as good, the Tivoli could be kept as an alternative addition, much like many Euro makers seem to offer nowadays. And it’s at a price and trim point that would be a good alternative to quite a few others. And the Tivoli has just had an addition to the range in the form of the long wheelbase XLV.

Here is how you can find out more.