Korea’s Kia has loaded up and fired broadsides in the battle to win a buyer’s heart in the thriving SUV passenger vehicle segment. 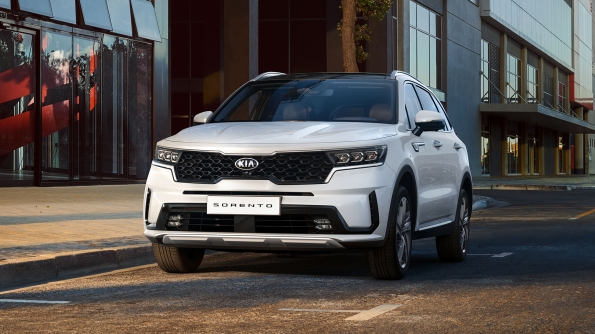 Kia Sorento.
Currently scheduled for an Australian release sometime mid-year, the updated Sorento has been given a substantial makeover. Key changes are to the exterior, particularly to the rear lights, front lights, and sheetmetal. There is a re-interpretation of the signature tiger nose grille, with a wider design that encompasses the headlights. The headlights have also been reimagined with what Kia calls a “tiger eye” LED DRL, said to evoke the lines around a tiger’s eyes. The lower air intake is bracketed by a pair of wing shaped intakes that assist in funneling air around the sides of the 2020 Sorento.

Kia’s added 10mm to the width taking it to a flat 1,900mm. It’s also longer by the same amount taking it to 4,810mm. The overhangs have been trimmed to give an impression of extra length and this has been helped by an increase in wheelbase length, up to 2,815mm from 2,780mm. Those changes hide the small 10mm increase in total height. Visually, the A-pillars have been pushed back making for a longer bonnet and a character line that draws the eye rearwards to the completely new rear lights. These are a more vertical styling and echo those seen on a premium U.K. brand, particularly with a three bar vertical theme. Underneath is a valance insert that gives the appearance of quad exhausts. 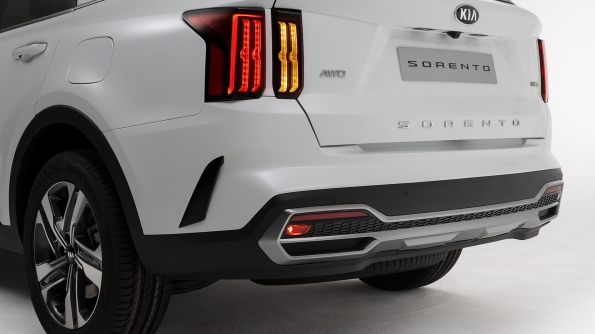 Recognisable Sorento design cues and new ones are here. There’s the broad D-pillar at the rear, the polycarbonate clad wheel arches, and the more modern “shark fin” window insert on the C-pillar. Sharper body mould crease lines also feature. Australian spec Sorentos will have a choice of seven exterior colours and four wheel sizes, from 17 to 20 inches in diameter.

Head inside and Kia’s designers have gone up a notch here. There’s an ultra-widescreen look for the driver and infotainment system, with a 12.3-inch digital driver instrument cluster paired with a 10.25-inch touchscreen infotainment and navigation system. The engineers have placed a new haptic feedback system to assist in controlling some key features including the climate control. A new look has been applied to the centre stack too. 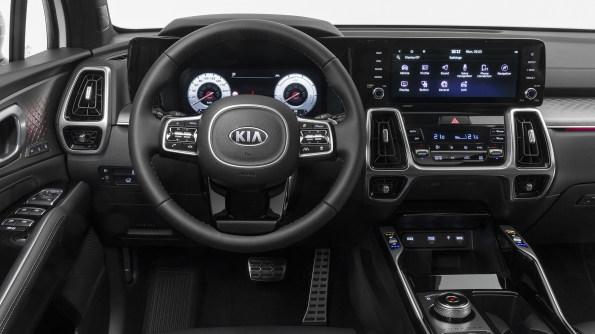 Ambient lighting is now part of the mood-setting system for the interior. There is downlighting from underneath the dash and inside the door trims. Bose supply the sounds and smartphones have a wireless charge pad. Metallic look trim complements and contrasts with Nappa leather, embossed black cloth, or cloth and leather trimmed pews for a higher quality, more luxurious feel.

The new Sorento is based on Kia’s new third-generation ‘N3’ midsize SUV platform (for the European market, in Australia it’s classified as a large SUV), providing superior space for people and cargo through more intelligent packaging. The result is one of the most versatile and spacious cars in its class. It also allows a new range of engines including hybrids to be fitted to the engine bay. A PHEV, or Plug-in Hybrid Electric Vehicle, will also be available.

“Smartstream” is the name given. It will be a 1.6L turbo petrol engine, with a 1.49 kWh lithium-ion polymer battery pack and 44.2 kW electric motor. The new platform has the battery pack located under the floor below the front seat passenger. Peak torque is rated as 350Nm. Power is rated at around 170kW. Part of this power comes from Kia’s new Continuously Variable Valve Duration (CVVD) technology. This works on regulating valve opening time according to driving conditions, instead of operating on a fixed opening time. This boosts performance at low-to-mid engine speeds by between 2 and 3%, and enhances fuel efficiency by up to 3%. A diesel will be available for European markets and is currently yet to be confirmed for Australia. Transmission for the hybrid is a six speed auto and an eight speed for the diesel.

The new chassis has given more cargo space as well. Kia says an increase of 32% for the seven seater version and with all seats in use, up to 187L or 179L for the diesel or hybrid versions. There is also extra head, shoulder, and leg room. There’s more slide room for the second row, with an extra 45mm, and the third row armrest now has a smartphone tray.

Details and pricing will be confirmed closer to the expected release date.