Long talked about…well, since the new look Ranger was released a couple of years ago, a performance version has been released. Taking an already assertive machine and making it look even more angry is not always easy yet somehow the Ford designers and engineers have done so. Here’s a brief look at the 2018 Ford Ranger Raptor. 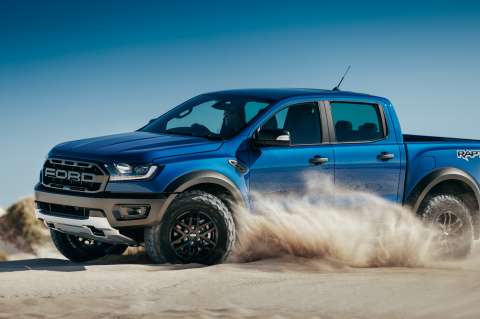 Engine.
A 2.0L diesel has been massaged to produce an astonishing 500Nm of torque, with a peak power output of 157kW. The twin turbo beat was tested to its limits, with a non-stop run of 200 hours. A small HP (High Pressure) turbo kicks off before a larger LP (Low Pressure) turbo takes over. A new ten speed auto, designed and built by Ford in-house, along with revamped electronics, has quicker, crisper, shifts, and promises even better economy. There’s two on road modes, Normal and Sport, plus Grass/Gravel/Snow, Mud/Sand, Rock, and Baja. It’s that last one that has eyebrows and corners of mouths raised. Ford says: Vehicle responsiveness is tuned for high-speed off-road performance, just like drivers need in the famous Baja Desert Rally. In this mode, vehicle systems like Traction Control are pared back in terms of intervention to allow spirited off-road driving without fighting the vehicle’s on-board systems. Gear selection is optimized for maximum performance, and the mapping will hold gears longer and downshift more aggressively.

Looks.
A bespoke Ford logo grille now sits front and centre. It sits atop a frame mounted bumper, which houses new LED fog lamps and air-curtain ducts to help reduce aire resistance at speed. The front fenders are made of a composite material, and are oversized to deal with off road excursions and suspension travel. It’s an impressive size; it stands 1873mm high, spans 2180mm in width and is an impressive 5398mm in length. Ground clearance is 283 mm, with approach and departure angles of 32.5 and 24 degrees enabling superior off road accessibility.

There’s solid looking side steps, specially designed and engineered to help stop rocks being sprayed backwards from the front tyres and are cut to allow water drainage.Made from an aluminuim alloy, they’re durable and tough. These also were tested hard, with loads of 100 kilograms being applied 84,000 times to simulate a decade’s worth of exposure to usage. They’re powder-coated before a grit paint for extra durability is applied.

The rear bumper has been modified to include a towbar and two recovery hooks which will hold 3.8 tonnes. Parking sensors are flush in the bumper, which backs a tray of 1560mm x 1743mm. Exterior colours are: Lightning Blue, Race Red, Shadow Black, Frozen White, as well as a unique Hero color for the Ranger Raptor, Conquer Grey. Contrasting Dyno Grey accents helps to accentuate the vehicle’s look even further. 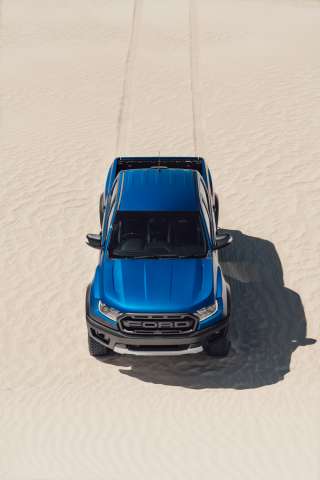 Inside.
This has been overhauled with a smooth and refined look, coming under the umbrella of Ford Performance DNA. The seats are the starting point, with a redesign and change of material being tested in long distance rallies. They’re tailored for high speed work in an off-road environment. The material inside is of a dual layer hardness, providing both comfort and support in their intended environments.
The dash and steering wheel have been redesigned, with the Driver Assistance features being easily read in the binnacle and magnesium paddles for the driver’s column. There’s a touch of high speed assistance in one key area; a red stripe has been applied to the leather bound wheel, intended to confirm for the driver that the steering is “On Centre”. 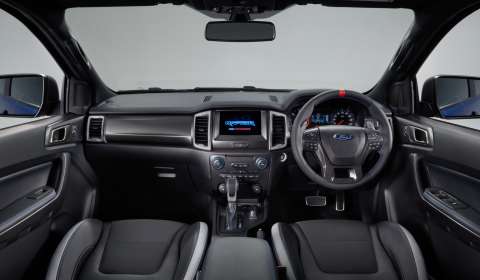 Underneath.
The off-road racing pedigree is evident in a chassis made from various grades of high-strength low-alloy (HSLA) steel and designed for that purpose. There’s coilover rear shocks, a Watt’s Link rear and solid rear axle. The chassis side rails are also HSLA. There’s a redesigned front end to deal with the strengthened higher profile shock towers. At the front, twin-piston calipers have been increased by 9.5mm in diameter, while the ventilated rotors are an impressive 332 x 32mm in size. At the rear, Ranger Raptor comes with disc brakes with a brake actuation master cylinder and booster to increase braking performance. The 332 x 24mm rear rotor is ventilated and coupled with a new 54mm caliper. These are housed inside new for Raptor BF Goodrich 285/70R17 rubber. 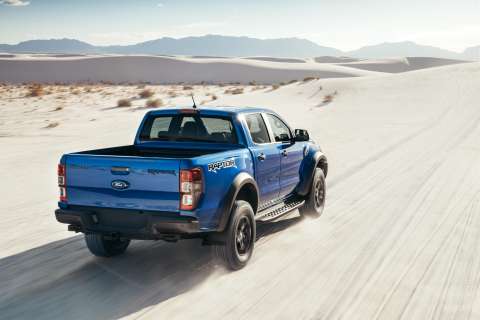 It’s not yet known when exactly in 2018 the Ford Ranger Raptor will be available although it’s fair to surmise it’ll be within the first half of 2018.