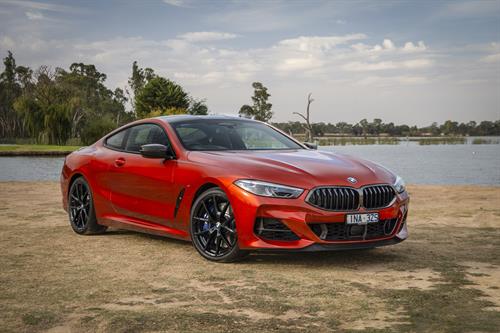 Power comes from a 4.4L twin turbo V8. 390 is the number of kilowatts, and they’re found between 5,500rpm and 6,000rpm. But it’s the impressive 750Nm of torque that tells a better story. Maximum twist is available from 1,800rpm and goes all the way through to 4,600rpm. This will launch the 850i Coupe to 100kmh in 3.7 seconds, with the slightly heavier Convertible just 0.2seconds slower. The torque comes from the inside-vee location of the twin-scroll turbos, with that location providing a better, quicker, response time. Aiding the beast up front is an eight speed auto with ratios well spaced to take advantage of the liners power and torque delivery. Matched to a manual change option of paddle shifts, BMW fits their brilliant “ConnectedShift” system which reads the road ahead and pre-empts a driver’s change of gears and adjusts the transmission automatically to suit the oncoming road. 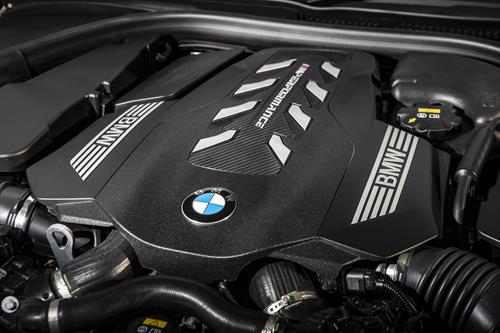 A very tech-laden feature in the 8 series is the BMW Live Cockpit Professional. It’s a hi-res and customisable 12.3-inch instrument cluster that sits behind the steering wheel, with a 10.25-inch Control Display mounted in the centre of the vehicle. 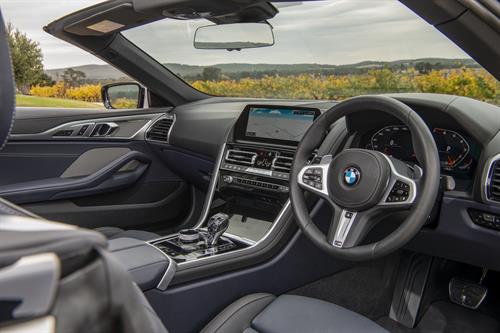 The BMW Operating System 7.0 connects the driver’s displays with the infotainment system, enabling the overlay of information from the Control Display onto the instrument cluster.

A new feature, and one sure to make its way through to other marques, is the Digital Key. Near Field Communication (NFC) technology allows the new BMW 8 Series to be locked and unlocked from a smartphone. The smartphone simply has to be held up to the door handle to open the vehicle and, once inside, the engine can be started as soon as the phone has been placed in the Wireless Charging tray. Available via the BMW Connected App, the Digital Key also offers plenty of human flexibility, as the driver can share it with up to five other people.

Carbon fibre plays a bigger role than before in the chassis.Called “BMW Carbon Core centre transmission tunnel”, it reduces weight and adds rigidity, allowing optimised suspension geometry and improving both ride and handling characteristics. Front suspension is a double wishbone setup, and it’s specifically designed to separate the steering function from the damping force.and a five-link rear uses bi-elastic mountings and houses a load-bearing rear strut to further enhance rigidity and response.

Should one choose the soft top, the BMW 8 Series Convertible roof operates automatically via the touch of a button. It completes the opening or closing motion in only 15 seconds and can be activated at speeds of up to 50km/h.

Check with your BMW dealer for more details.
(Information courtesy of BMW Australia.) 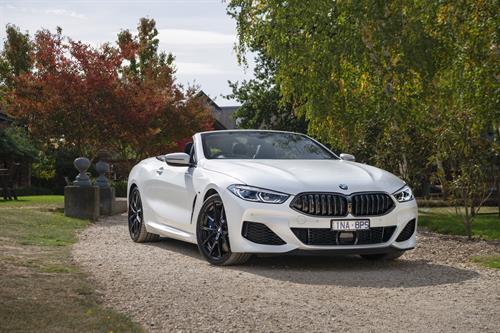