It’s back to the future for Holden as the Astra nameplate on a sedan resurfaces with the sedans developed in Europe and built in Korea. The name replaces the Cruze, itself a resurrection of a previously used nomenclature. We’ve had the European sourced Astra hatch for a while and there’s also a new wagon version on the way. A Wheel Thing spends time with the mid-spec LT, top spec LT-Z, and entry level LS (there’s also a LS+), all fitted with the same engine and transmission combination.

Up front, and the sole choice for a powerplant in the Astra sedan, is a 1.4L petrol engine, complete with turbo and good for 110 kilowatts. There’s 240 torques available between 2000 to 4000 rpm, with an extra five if you go for the six speed manual which is available in the LS only. Recommended go-go juice for the 52 litre tank is 91RON, of which it’ll drink at over eight litres per one hundred kilometres in an urban environment. On the freeway AWT saw a best of 6.3 in the LS and 7.1L/100 km in the LT-Z. Holden’s Astra sedan brochure doesn’t appear to specify weight, however elsewhere it’s quoted as being just under 1300 kilograms.

The engine itself is a willing revver, especially so when the torque is on tap…for the most part. What was noticeable was the lag between a hard prod of the go-pedal, the change down a cog or two, and the resulting leap forward. In tighter Sydney traffic when a quick response was needed in changing lanes, that hesitation could potentially result in a safe move not being as safe as it should be. Also, in the LS, a noticeable whine, an unusual note at that, was audible and not found in the LT or LT-Z. Otherwise, once warmed up, the six speed auto had invisible gear changes up and down on a flat road, and downshifted nicely, holding gears, on the bigger downward slopes out west. 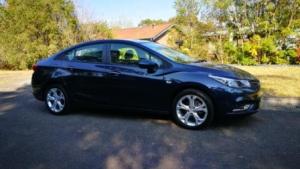 It’s a trim, lithe, almost handsome car to look at though. It’s a longish 4665 mm in length and hides a boot of good depth and breadth at 465 litres. The rear deck lid does have old school hinges that swing down into the boot space though. The boot on the LT and LT-Z gain a small, discreet, lip spoiler as well. It’s also broad, with over 1800 mm in total width, and stands 1457 mm tall. What this gives you is 1003 mm front headroom, 1068 mm legroom, 1394 mm shoulder room, and in the rear 1350 mm shoulder room. 939 mm and 951 mm are the numbers in the rear for leg and head room. 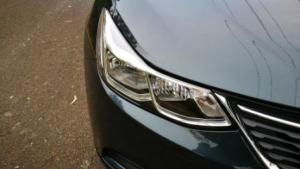 Up front, the three are virtually identical, bar chrome strips in the lower corners of the front bar for the LT/LT-Z. The headlights are LED DRL backed from the LS+ upwards and provide quite a decent spread of light. The headlight surrounds themselves gleam in the sunlight and add a solid measure of presence to the look. Wheels wise they’re all alloys, with a 16/17/18 inch and appropriate tyre size to match. There’s 205/55/16, 225/45/17, and 225/40/18s. And each of these contribute to the ride quality to the differing models… 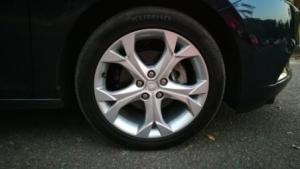 The LS is undoubtably the most plush, soft, of the three, but by no means does it lack grip when pushed. The rubber on the LS is from Hankook, the LT and LT-Z have Kumho Ecsta. Both brands provide more than enough grip and even occasionally chirp when when hard acceleration is given and both brands do provide a rumble, a somewhat intrusive rumble, on the coarser chip tarmac in Sydney. The LT and LT-Z also benefit from the fettling the Australia engineers have given, with a firmer and more sporting ride, less rebound but a small measure of more harshness.

All three are brilliant freeway cruisers but it’s around town that the suspension tune really shines. In the varied road conditions that Sydney throws up, from table flat to mildly pockmarked to rutted and broken tarmac, all three dealt with them adroitly and with the words “sure footed” writ large. Only occasionally would the LT-Z, with the stiffest feel, skip and that was more so on the more ragged undulations that some corners have. There’s plenty of conversation from the steering wheel vinyl in the LS, leather in the LT/LT-Z), with an almost tactile amount of constant feedback through to the driver. 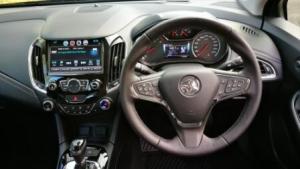 Speaking of steering, the design of the wheel itself has your hands feeling as if they’re sitting between ten & two and eleven & one. The horizontal spokes sit just that little too high for a totally comfortable feel. You’ll also dip out on electric seats, even in the LT-Z, however there is more manual adjustment than in the LS. Across the range you’ll get auto headlights (which have an overly sensitive sensor), parking sensors, reverse camera, Android Auto and Apple CarPlay, along with a seven inch and eight inch touchscreen for LS and the LT models.

Digital radio is also on board the LT and LT-Z to take advantage of the quite decent speakers on board. Also available in the LT and LT-Z are parking assist and with front parking sensors, Blind Spot Alert, auto headlights with tunnel detection, whilst the LS+ joins the party with Lane Keep Assist, following distance indicator, and Forward Collision Alert. However, window wise, only the LT-Z gets auto up and down for the driver’s window. 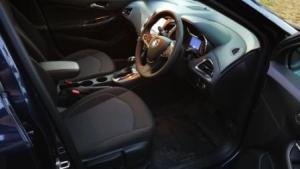 Trim wise it’s cloth seats or machine made leather, soft-ish touch plastic on the dash, a grey coloured surround for the touchscreen and a frankly boring look for that in the LS, versus a higher sense of appeal and presence in the LT/LT-Z with chrome and piano black. Aircon in the LS is dialled in whereas the others get dials but with LEDs in the centre to show temperature and add more visual pizzaz. There’s a colour info screen in the LT and LT-Z’s driver binnacle which mirrors that seen in the touchscreen.

Both look fantastic and appeal greatly. The LS? Standard monochrome. There’s clearly a high level of quality in the build being based on a Korean sourced sedan, but inside the Astra sedan does lack visual appeal, even though it’s not a physically unpleasant place to be.

At The End Of The Drive.
At the time of writing, just a few days before Holden ceases manufacturing, the company had announced a seven year warranty being made available for the Astra range. However, there are terms and conditions so please speak to your local Holden dealership. Also, again at the time of writing (October 2017), the LS Astra sedan was being offered from $20990 driveaway if you choose the manual.

All three (of the four trim levels available) cars tested did not disappoint; the LT-Z for AWT would be the pick, if only for the more sporting feel of the ride, the higher trim level and the fact that DAB is included, as it is below this model. But as a model range intended to effectively assist in kickstarting the importation model for Holden from October 2017 onwards, it’s somehow slipped under the radar. And that, so far, is a shame because it’s a very capable vehicle and more than worthy of continuing the legacy of the Holden Astra name.
Here’s where to go for inforamtion: 2018 Holden Astra range