It’s rare that Mercedes-Benz and AMG make lots of noise about a new model so when they do it’s clearly something special. And so it is with the AMG four door coupe called, logically, the AMG GT 4 Door Coupe. However there’s more being offered to commemorate the release. The Edition 1 will feature bespoke interior and exterior enhancements. 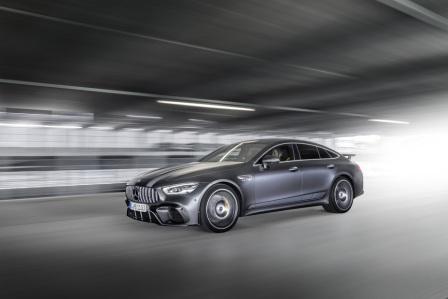 There will be 21 inch forged alloy wheels in black, a Graphite Grey Magno paint scheme, a bluff nose that links to a longs and slinky coupe body. Aerodynamically there’s a larger front bar and integrated air intakes, a larger rear diffuser, and a stand out rear wing. It’s fixed to the metalwork however the wing itself can be adjusted by the driver whilst on the move, with the whole body package dropping the drag co-efficient and increasing downforce. 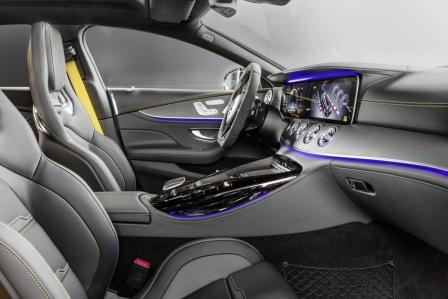 AMG fit their Performance seats with memory placement inside and they’re a gorgeous mix of Magma Grey Nappa leather with black highlights, highlighted by contrasting yellow cross-stitching. The cabin is further enhanced by matt toned carbon fibre and a Performance enhanced steering wheel with micro-fiber and yellow stitching, plus the seat belts are complementary yellow. The door panels are trimmed in Magma Grey as are the armrests and center console. The air-conditioning is also supplied with a new, bespoke, AMG #63 fragrance. 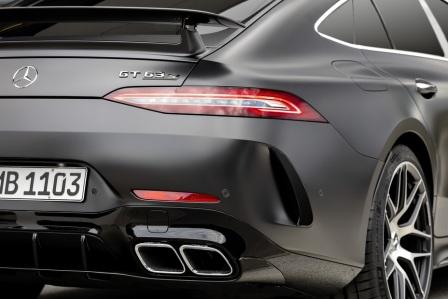 AMG engines are known for their ferociousness and to celebrate their first four door coupe, a hand-built 4.0L twin turbo V8 is shoehorned into the engine bay. Power and torque are indecently decent at 630 horsepower and 664 lb-ft of twist between 2,500 to 4,500 rpm. This results in a zero to sixty mph time of 3.1 seconds as it gets on its way to a top speed of 195 mph.
The powerplant is bolted to the Performance 4Matic + all wheel drive system. Electronically there’s variable torque distribution, Drift Mode, and works hand in hand with the AMG Speedshift nine speed auto. 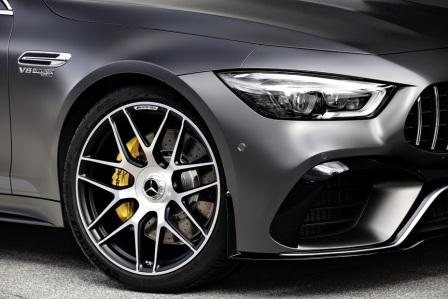 Pricing hasn’t yet been released but the car will be showcased at the Nurburgring during the ADAC Zurich 24 Hour race over the weekend of 12/13 May, and will be available for the US market in early 2019. A GT 53 model will be made available for later in the year.