Toyota kickstarted the family people mover tradition long before SUV took over that role. The Tarago inspired other companies to build a people mover, such as Mitsubishi and their Grandis, and Honda’s long running Odyssey.

Kia joined in with the Carnival and in late 2020 unveiled a heavily facelift version. The Carnival Platinum supplied is on a drive-away price of $69,990 with premium paint just $695, a bargain for the amount of sheetmetal.

Available in four trim levels, being S/Si/SLi, and Platinum, and with a choice of petrol or diesel engines, both familiar to followers of the brand and its larger sibling, the 2021MY Carnival looks set to continue its predecessor’s position as the number 1 people mover in Australia.

Unlike the Sorento, to which it’s closely related, the Carnival comes only in front wheel drive guise. With 440Nm from the 2.2L diesel, it initially seemed that FWD was a smart decision. However, constant “chirping” or momentary spinning of the front tyres appears to suggest the torque-split AWD system may not be a bad idea after all. 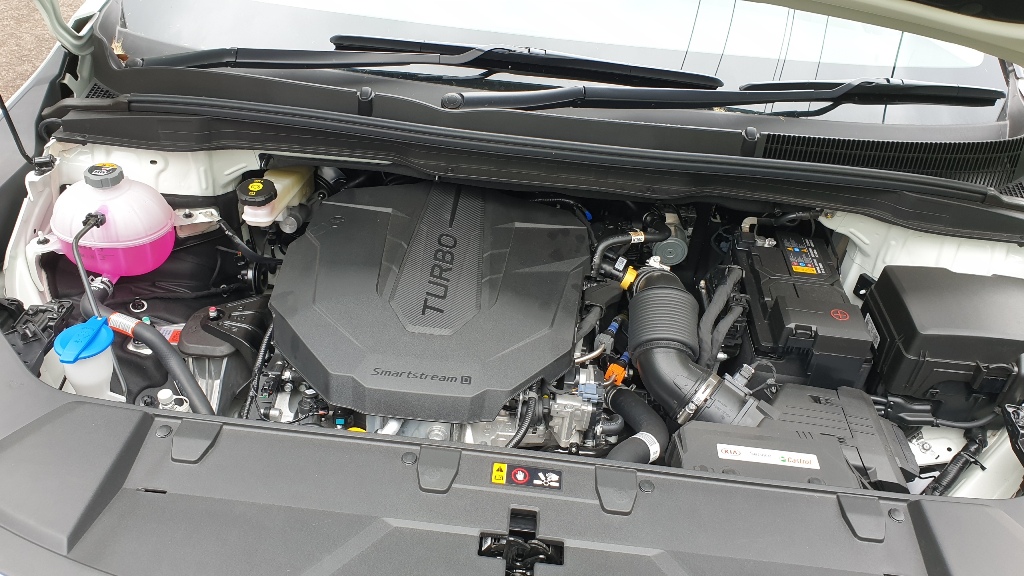 The eight speed auto is also well proven, and in the Platinum, is engaged via a translucent rotary dial, with Reverse, Neutral, Drive from left to right, and Park a button in the centre. It’s easy to use, intuitive and quickly so for people used to the traditional lever style.

Although the engine and transmission are carried over (bar the engine now having a new alloy block but staying at 2.2L), the exterior is largely all new. The grille is a deeper, more recessed item, headlights are far slimmer and LED, and now feature a thin LED strip for the DRLs with Kia’s “fin” subtly integrated here.

This is matched by the change from the former pair of rear lights to one unbroken strip, echoing the change made to Kia’s halo car, Stinger.

Another standout change is the addition of what is becoming a Kia signature on the rear bodywork, and one not to all tastes. A thick alloy-look fin adorns the C-pillar, and has a diamond motif embossed in. It’s not to our taste. Thankfully, it’s not seen from inside.

In profile, the visual change from the previous is seen in the lower window-line. It’s a straight one, with no kink at the C-pillar. The roof looks flatter and its own line parallels the lower from the A-pillar rearwards. Rubber is from Continental, and they’re a big 235/55/19 in size. 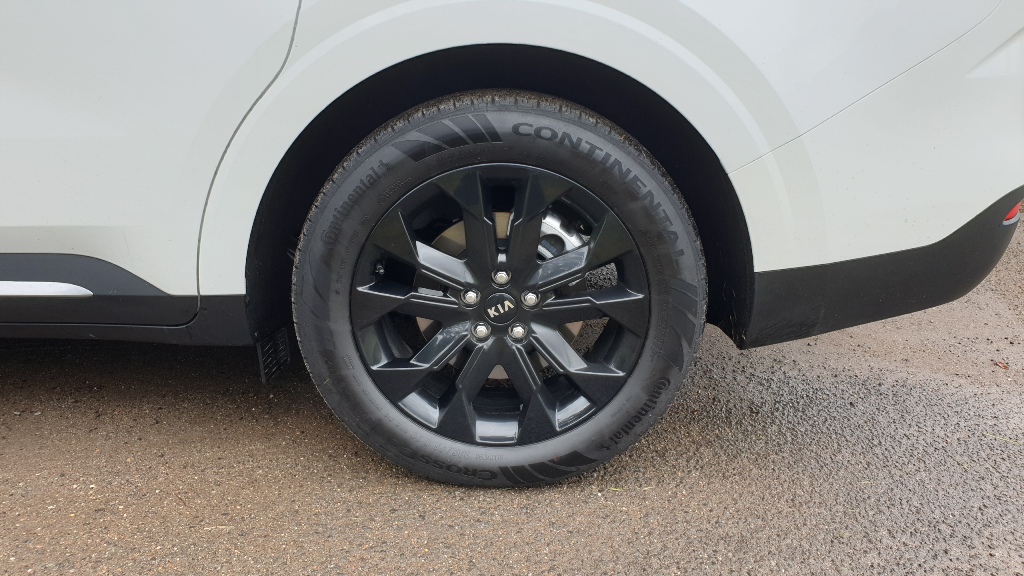 The 2021 Carnival has also been given a new chassis, one shared with Sorento. There’s a longer bonnet, noticeable when put side by side with the previous car, but a shorter front overhang and longer rear. It also loses some of the ovoid sheetmetal look and has more defined lines around the arches. Somehow, Kia’s managed to bring the drag down to just 0.33, which makes it slipperier than a VE Commodore, Holden’s much vaunted “billion dollar baby”.

The interior is accessed via the powered rear door, powered side doors, and wide opening front doors. Each of the front doors have backlit inserts that show the same diamond look. It’s in keeping with the rest of the Carnival; classy and subtle.

The review vehicle came with black painted alloys, white paint, and black leather seating that contrasted with the white trim material and mid-grey faux-wood dash inserts. The centre console is Kia’s familiar alloy look plastic and houses the rocker switches for the heating and ventilation elements and a wireless smartphone charge pad.

There’s an elegant sweep in the whole design, with Kia drawing lines that follow the dash across the top in a single curve, and at the bottom that has the trim join the lower section of the dash and houses some of the buttons for items such as the rear door opener. Again, classy, and subtle. 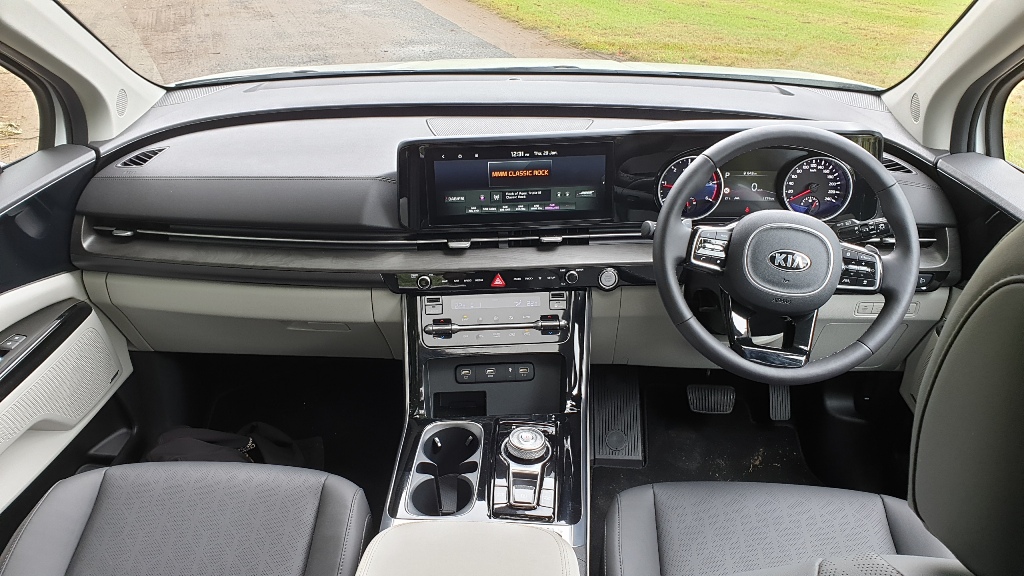 Ahead of the driver is a steering column, complete with virtually redundant paddle shifters that’s adjustable for reach and rake. There’s also Kia’s new super-widescreen binnacle that houses the driver’s display and the 12.3 inch touchscreen for audio, navigation, and various subsidiary settings plus smartapp compatibility.

When the reverse camera and viewing cameras are engaged, we see a high definition picture with startling clarity. There’s the same clarity thanks to the 12 speaker Bose sound system fitted; there’s plenty of beautifully balanced bass and mid-range, with the treble for the front coming from A-pillar mounted drivers. 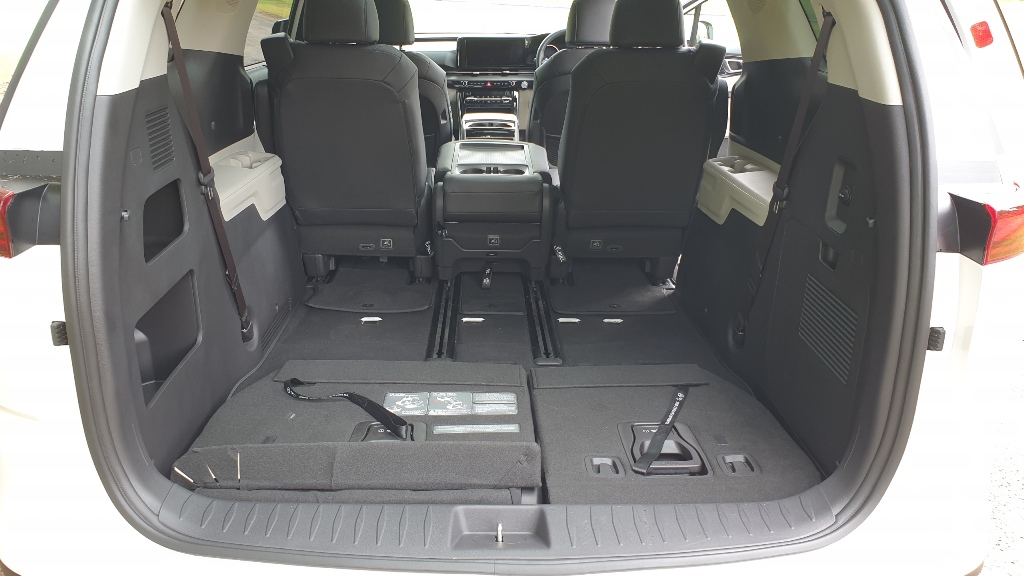 Seating is set for eight, in a 2+3+3 configuration, with the middle row having a removable section in the centre, and the rear seats folding down into a recess. They’re the weak spot of the Carnival and that’s a surprise given its intended purpose. There are two methods used to fold the seats. One is the simple pull-strap system that is used to fold the upper part of the rear seats.

The other is a more solid plastic handle that latches and unlatches the seats to be pulled up for passengers or lowered to provide a flat load floor. However, when pushed into their recess, the pull-strap can still be used to raise the seat backs, and a couple of times we found we could catch the solid handle on the load lip. Not entirely safe nor fool-proof. The centre row seats are manually flipped.

The rear does have convenience items for passengers with cup holders, 12V and USB ports, plus a pair of hooks for shopping or clothing. Kia says there are nine cup-holders in total. Cargo capacity is measured in both SAE and VDA, and Kia says 1,139L/2,461L SAE or 627L/2,785L VDA with the third row up or folded. There are also retractable window blinds for both second and third rows.

Those powered sliding doors are as easy to use as they can be. Aside from the keyfob and dash buttons, the handles are a simple pull to open or close, plus there are are buttons in the pillars behind driver and passenger that do the same job. A new and nifty feature is auto-open.

Have your hands full? Stand next to the Carnival in Platinum and SLi trim, and the doors read the keyfob, and open without a touch. 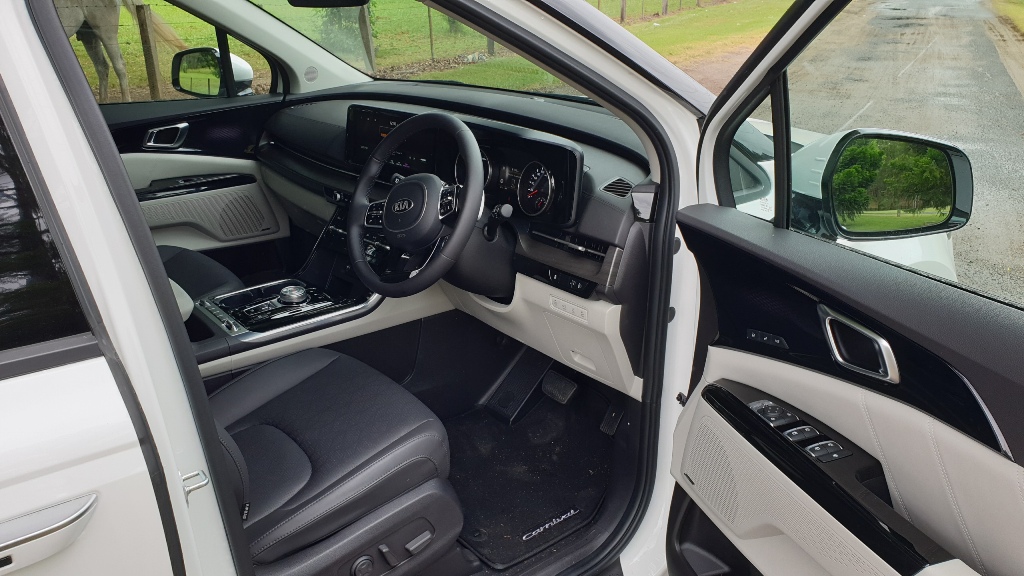 For a big vehicle, and one that has a starting weight of just under 2.1 tonnes, the 2.2L diesel makes light work of the Carnival’s size. It’s a huge 5,115mm (up by 40mm) in length and that interior room is courtesy of a wheelbase of 3,090mm (up by 30mm). From the start it’s a flexible thing, with the ability to pull the Carnival to freeway velocities at a respectable pace, to puttering around the ‘burbs with the family. There are the usual drive modes, and Normal appeared to be the one best suited for daily driving. Sport did come in very handy in some slow moving highway traffic but the programming’s tendency to hold gear is one to be aware of in such a situation.

There’s plenty of sound insulation which isolates the diesel, a refined and new alloy block unit as it is. It makes cabin conversation natural without a need for raised voices, and it’s also a relaxed cruiser. Hit the highway and arrive relatively fatigue free thanks to the noise levels being so low and the suspension setup.

That mass is beautifully handled by the McPherson strut and multilink suspension, with no discernable body roll, bumps that are largely ironed out thanks to some well-tuned damping, and a steering setup that is light and rapid in response thanks to the electronic assistance. This provides a turning circle of just 11.7 metres. In a three point turn situation, that rapid steering and simple drive selector make it a quick thing to do. As a driving experience, long gone is the sensation of a box on wheels. As big and van-like it is, there’s more a sense of driving mid-sized car, not a big people mover.

Being a family-centric machine, the Carnival comes loaded with safety features. This includes full length curtain airbags for the centre and rear seated passengers, and a driver’s kneebag for all for trim levels. Rear Cross Traffic Collision Avoidance Assist is on the SLi and Platinum, plus three linked Assist services, being Lane Keep, Lane Follow, and Lane Change. Other Assist features are Intelligent Speed and Blind Spot Collision Avoidance. There are also five ISOFIX brackets inside in the seats. Rear Occupant Alert is Platinum specific and will effectively yell at the driver if the car is locked, and seat sensors have weight i.e. a human, being read.

Warranty is Kia’s trendsetting seven years, with capped price servicing, plus seven years roadside assist. Serving prices are yet to be confirmed by Kia Au but it’s fair to anticipate they\d be similar to the outgoing model.

At The End Of The Drive.

Once again Kia has delivered a worthy alternative to the seemingly endless procession of SUVs. Yes, we recognise the irony of that statement but simply put, not everyone has a need or desire for an SUV if moving people. The Carnival’s interior packaging is both versatile and spacious, all of the trim levels have a great safety package, and the ride setup is superb, even on the big 19s and thinner sidewall. In short, the Carnival doesn’t skimp on backing up its promise to deliver the perfect family people mover.