This review is a little different in that the difference between the Holden Equinox LT petrol we’ve reviewed and the Holden Equinox LT diesel is….the engine. And gearbox. Apart from that, there literally is nothing different about the car inside or out. Same interior trim, same annoying Stop/Start tech that canNOT be switched off manually, same reasonably attractive exterior. The link to that review is here: 2018 Holden Equinox LS Plus and LT petrol
What the diesel offers is a 1.6L capacity engine, with a six speed auto transmission only. The current RRP is $39,990 and that’s a three thousand dollar difference over the equivalent petrol version. Standard warranty is five years but Holden were offering a seven year package.

Peak power is 100kW, with peak torque being a very good (for the size of the engine) 320Nm. That’s a narrow maxium torque range, from 2000 to just 2250 rpm. Fuel consumption for the 1.6L in LT trim is a thrifty 5.6L/100 kilometres on the combined cycle. Go to the heavier LTZ & LTZ-V and that goes to 5.7L/100km or 5.9L/100 km. The six speed auto is also a standard auto, in that it’s a torque converter style, not a dual clutch or CVT. It’s an interesting drive setup; the traction control appears to have been formulated to allow some front wheel drive slip. Give the go pedal a good prod from stand still and there’s a noticeable scrabbling for grip for a second or two before the tyres hook up. Actual forward motion is deceptively quick. There’s a mild thrum from the front, which indicates there’s plenty of noise insulation and there is. There’s sheets fitted to the wheel arch and firewall, plus there’s a form of active noise cancellation too. 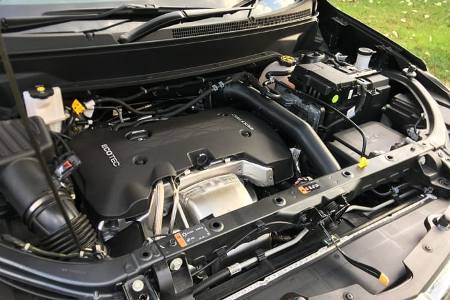 The transmission selector is the same mechanism as found on the nine speed, with a rocker + and – switch for manual shifting. Like most well sorted electronic autos, there’s little to be gained in normal driving conditions by using the manual change. From a standing start and a low throttle application, the six speeder rarely disappointed. The diesel itself is throttle responsive, with a free spinning nature up to around 4000 rpm. Our real world drive, covering both urban and highway, saw a final fuel consumption figure of 6.1L/100 with a 75/25 urban leaning driving style.

Expect that figure to increase if you fit a towbar and utilise its 1500kg (braked) towing capacity. Bear in mind it’s a small diesel, not the bigger 2.0L or 2.2L (or even bigger) as seen in larger SUVs or utes. Other reviews seem to point out the relative lack of oomph from this engine but they’ve matched the 1.6L in the Equinox against 2.2L engines as found elsewhere. A fairer comparison would be against Suzuki’s excellent Vitara diesel. Although smallish, there’s still plenty of get up and go for when it’s needed. Roll off slowly and there’s quiet, unobtrusive changes and barely a hint of that traditional diesel rattle. Push a little harder and the changes are crisper, with the engine making itself known audibly but still quietly as mentioned. It’s really only when a heavy right foot is employed that the diesel really gets noisy and the six speeds seem to be lacking a cog or two or three.

Holden’s electronic engineers haven’t built in a feature to turn the Stop/Start mechanism off. The theory behind the feature is that it’s a fuel and emissions saver for when stopped at stop signs or red lights. the downside is that sometimes the car’s barely stopped before forward progress can be restarted. It can catch the car (and driver) unawares and sees the Equinox lurching forward, rather than moving smoothly. A little trick is that if the foot is lifted slightly off the brake pedal, it’ll re-engage the engine and still stop the car moving forward.

Ridewise it’s the same well sorted and compliant Australian tuned for Australian conditions ride as found in the petrol models. If there’s really anything that Holden should consider with the Equinox diesel, it’d be to evaluate having the nine speed fitted and calibrated to suit the specific torque delivery of the smaller oiler.

Another factor to consider is the forthcoming release of the Acadia, a larger SUV and a seven seater at that, helping Holden to re-target customers in the SUV market.