Car makers tend to have a vehicle that seems to define what that brand is. Holden has the Commodore and Kingswood, Ford the Falcon, Jaguar the XJ6. For Japanese goliath, Toyota, you can say Land Cruiser and Corolla and it’s the latter that perhaps embodies how a brand can be seen. A Wheel Thing checks out the heart of Toyota, the 2017 Corolla Ascent, in sedan and CVT form.

Apart from the obvious difference in body shape between hatch and sedan, Toyota have given the sedan some subtle but noticeable design tweaks. The bonnet’s shut lines are more aligned with the Camry and the headlight structure is longer, running down towards the centre of the grille further than the hatch’s. Toyota have also given the front a more Camry and Lexus look, with the “spindle” look more noticeable. 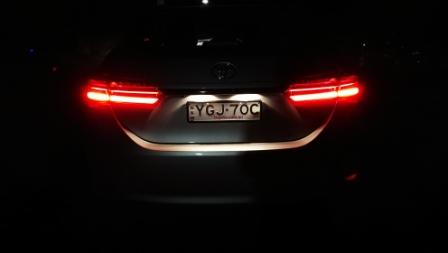 The taillights echo the Camry and there’s three distinctive crease lines under the C pillar, plus an aero ridge inside the wing mirrors to deflect rain. It’s the rear that lends a slightly frumpy look to the car, with a curve coming down from the lights and a high set join line, making the rear look heavy. The Ascent has 15 inch steel wheels with an alloy look complete the exterior. It’s also bigger than the styling has you believe, with an overall length of 4620 mm encapsulating a 2700 mm wheelbase and 470L boot, bracketed by a low 1460 mm height and a surprising 1775 mm width.

Inside it’s typical Corolla and, in parts, doesn’t look like it’s changed since the 1970s. Black solid plastic, rotary dials for aircon and vents contrast with the brilliant blue backlit dials and touchscreen. There’s some brightwork with alloy look plastics on the doors, steering wheel hub, centre console and on the edges of the touchscreen. 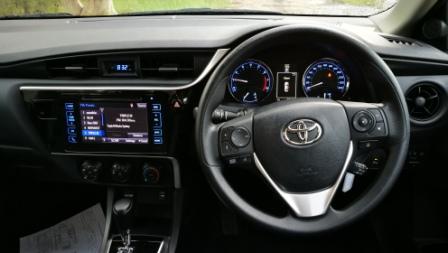 The seats and steering column are manually adjusted, with a basic black cloth covering the pews. Staying true to the history of the Corolla, Toyota fits a non electric, “old style”, lift up hand brake. And there’s never anything less in the presence than the feeling of typical Toyota build quality.

Up front is the tried and proven combination of a 1.8L block with a four valve alloy head. Drinking unleaded at a rate of 6.8L/100 km (claimed, combined cycle) from a 55L tank, the engine produces 103 kilowatts at 6400 rpm, and requires 4000 revs to produce a maximum torque of 173 Nm. The test car was fitted with a seven speed CVT, in opposition to the standard six speed manual.

Toyota have programmed this to act a little more like a traditional auto, in that there’s more feeling of a change of gear and a little less focus on the traditional CVT characteristic, that climb through the rev range and holding at a certain point as speed builds. The variable valve timing’s change is also perceptible, with an extra kick at somewhere around 3500 rpm.

On the road, the Ascent’s ability to be an average, every day, mode of transport is on display. It’s neither under or overwhelming its ride, handling, comfort level. It just simply…does. Acceleration is neither leisurely nor outstandingly rapid, steering is neither sharp nor excessively vague, with more than a seemingly normal turn left and right to get the car around corners. The skinny-ish 195/65 tyres will provide enough grip for normal driving, but anything remotely sporting has them understeer and squealing in protest. They’ll also tramline, having the Ascent follow ruts and ridges, however the steering is polished enough for drivers to stay in control. However, the brakes are amongst the best in class, with a beautifully weighted feel from top to bottom, and no sense of anything other than the foot being able to read just where in the process the grip level is.

Although entry level, there’s a rear camera, parking sensors, Bluetooth, a cruise control related distance sensor, apps via the touchscreen (which require a smart phone to be paired), and a range of driver’s information via the dash’s central screen. There’s no DAB, nor do all windows get one touch up/down movement. However there’s still only a three year warranty for car and paint and just five years for corrosion.

At The End Of The Drive.
The Corolla Ascent sedan is the embodiment of the reason why the Corolla has been, for so long, the world’s number one selling car. It does what it does, quietly, with an unassuming way about it, without setting the world on fire. And that’s the appeal of the Corolla: there’s no surprises, you know exactly what you’re getting, and it’s dependable and reliable as a sunrise.
For pricing and details, go here:2017 Toyota Corolla Ascent