When an SUV is nominated for, and wins, best car awards, there’s a fair bet something is being done right by the company that builds it. Kia’s Sorento was carsguide’s 2015 Car of the Year, Drive’s best SUV for 2015, and a winner in Australia’s Best Cars Family Wagon and SUV categories. A Wheel Thing looks at the current entry level model in the range, the Kia Sorento Siwith auto and V6 petrol engine.

What you’ll find inside and out is a mix of the quality buyers expect from the Korean car maker. There’s Kia’s three modes for driving (Eco, Sport, Normal), safety in the form of Electronic Stability Control, Vehicle Stability Management, Hill Start Assist Control, and even the Euro style Emergency Stop Signal. Front and rear parking sensors, rear view camera with parking guidance, auto headlights, curtain airbags as standard and pre-tensioning seatbelts add to the package.

Sorento has been a solid looking car and the 2017 model year version is no different. The Si rolls on a set of 17 inch alloys, bolted to a 2780 mm wheelbase. Overall length is 4780 mm, just slightly shorter than Kia’s brilliant Optima but stands at 1690 mm, giving the Sorento an imposing presence. A slight makeover for the current model involved a broadening of Kia’s signature “tiger nose” grille, a freshening of the front and rear whilst largely remaining the same in profile. Rolling stock is 235/65 Kumho Crugen rubber on 17 inch alloys. 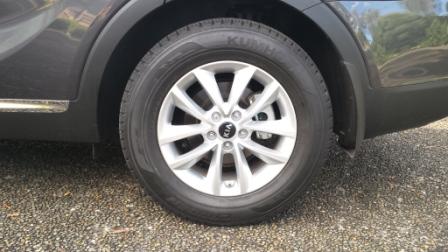 Inside, it’s cloth seats (all seven of them), with the rear two and centre three folding flat by virtue of a pull strap (rear) and a handle mounted in the base (centre). They’re easy to deploy at the rear and only slightly less so in the middle. Raising the centre seats is a bit more of a problem and for the slightly built it could be a struggle. There’s plenty of padding and support up front in the seats themselves, allowing both comfort and security for the passengers, and the rear row also gets separate air conditioning. 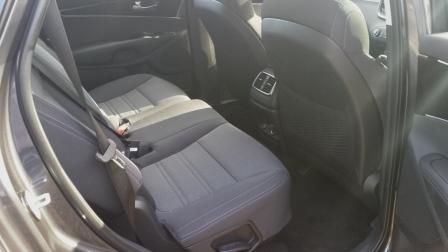 The cabin’s upper dash is a swathe of black textured plastic, with a curve running from each door to around and underneath the windscreen and highlighted by a grey plastic wood trim. It’s good looking and feels soft enough to the fingers. Underneath it’s the smooth, more matte than gloss, plastic and the typical synergystic ergonomics expected. There’s little thought needed to where your fingers need to go as once you’ve eyeballed the layout, it’s instinctive as to what you do.

The steering wheel houses the usual array of cruise control, Bluetooth and audio controls, and is thick enough to impart a feeling of security and control when under way. The material feels like leather and is cool to the touch. The Si uses a standard key for starting, rather than the push button system found elsewhere in the range. The actual steering feel was lighter than expected but also didn’t feel over assisted on the road.

At the rear there’s the aforementioned third row of seats, with their separate aircon zoning. With these and the centre row seats up, you’ll have 320 litres of cargo. Lay them flat and that jumps to 1077 litres. If you’ve just bought a new flatscreen tv and need some extra room, the middle row goes down and cargo goes up to an astonishing 2066 litres. You’ll also see an extra USB and 12V port pair.

Ride and handling surprised in the stiffness of the suspension; the square kerbs in A Wheel Thing’s suburb provided a unique opportunity to test the suspension’s suppleness. Bearing in mind the Si is two and front wheel drive, not all wheel drive, the Sorento would “cock a leg” coming off the verge and kerbs at an angle. However, that stiffness added to the stability and handling characteristics of the Sorento, ensuring any driver will feel the car is firmly planted on the road. There’s just enough give in the suspension’s setup to allow for the normal lumps, bumps, and ripples to be dialled out for the sake of comfort.

Back to the engine: it’s a free spinner when required and does actually move the two tonnes, when loaded, away well enough. Sink the slipper and although there’s a cost in economy, there’s an engaging and throaty roar, coupled with the swift and smooth changes of ratios. It’s not raucous yet has a metallic keen and it’s not thrashy yet there’s a sonorous buzz as revs climb.

The transmission itself is actually more smooth in its changes when pushed than when under light load. The changes are more noticeable, feel as if they take longer yet become invisible under a heavy throttle. There’s the manual shift option for the selector however Kia has elected not to fit paddle shifts.

At The End Of The Drive.
Kia make damned nice cars, there’s no doubt about that. The perception of the brand IS increasing and slowly not being seen as a cheap Korean alternative but rather a maker of quality vehicles. There’s some great concepts and variations hopefully on the way but until Kia addresses the consumption figures, there’ll be a wariness from buyers. A Wheel Thing has just spent time with a HSV V8 powered vehicle, with an engine capacity of 6.2L up front. That finished on an average of 12.0L per 100 km, which puts the quoted figures of the Sorento Si under the spotlight. And with a driveaway price of just over $45K catching the eye of many families, fuel costs are a consideration.
For further details, go here: Kia’s 2016 Sorento