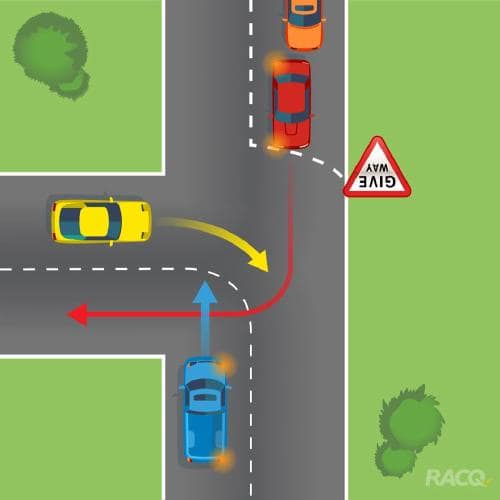 This picture, put into circulation by the Royal Automobile Club of Queensland, asked what really should have been a simple question to answer. Of the four cars pictured, which has the right of way?

Surprisingly, an overwhelming amount of respondents to the question, shared by us also, said the blue car. Straight away this raises an issue that should have the politicians and heads of traffic police investigating better driver education and training.

Of the four cars, one is behind another and therefore is immediately out of the equation. The car it’s behind is at a Give Way sign, and must remain stationary until other cars have passed through. The blue car is crossing a clearly marked delineation on the road’s surface. Road regulations state that any crossing of such a marked line,including at roundabouts, merge lanes, and intersections such as this, require indication.

This leaves the yellow car, following the road as marked by the dotted centre line, as the first car to go through. The RACQ themselves published this: “The give way sign at this intersection makes the path the yellow vehicle is on the continuing road, which curves to the right. The red and orange vehicles are facing a give way sign and must give way to all other traffic. Therefore the yellow vehicle goes first, the blue vehicle goes second as it is effectively turning right off the continuing road and the red and orange vehicles follow.”

Responses to this ranged from: “ Yellow, Blue, Red, But why is Blue indicating right? There is no right turn” to “There should be a give way sign at the t-section and not where it’s currently placed.”

Questions were raised about the road design and markings: “The marks on the road mean nothing . It clearly states in the road rules all vehicles must give way to the vehicle on your right. As there is no give way sign, stop sign or arrows on road, apart from the red car with give way sign. So it is blue ,yellow and red.” It’s this kind of response that should also raise red flags with road designers.

Many queried why the blue car was indicating. The Queensland government’s official stance on this is:” When you change lanes, you must give way to any vehicle in the lane you are moving into. This rule applies even if your lane is ending and you have to cross a lane line. “

These are from the NSW Roads and Maritime Services website and clearly show the same regulations that should be adhered to. And in one succinct sentence: ” Generally if you’re turning across another vehicle’s path, you must give way.” At all times, any lane change, be it as shown here, or at merge lanes, or at roundabouts, indicators MUST be used.

Finally, it seems that governments really do need to rethink their road safety plan if something such as this, in a hypothetical sense, potentially translates to a real world situation. If so, it means many drivers in the blue cars would be held responsible for the crash.

Be the first to comment on "Yellow Or Blue: The Question That Exposed Driving Ignorance"