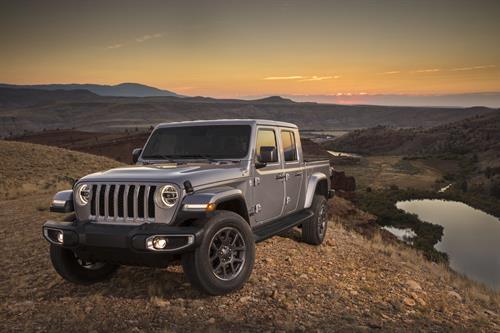 Jeep has unveiled its four door ute. Named Gladiator, it’s a Wrangler clone from the front until the beginning of the tray. From here it gets big. 5.5 metres big. The tray itself has a unique imprint which is part of the aim to have it seen as a lifestyle vehicle, not a “tradie’s ute”. For the family oriented, a dirt bike imprint in the front of the tray says straight away it’s for fun, not work. Backing that up is the set of four tie down points to help strap in the two wheelers.

Jeep have also ensured that when the going gets tough, it’s up to the task. The body underneath is steel, ensuring there is plenty of strength. The lower sides of the Gladiator are alloy.

Power will come from the 3.6L V6 petrol, and eventually a 3.0L diesel. Drive to the ground will pass through an eight speed auto with six speed manuals available overseas. Both engines will have ESS, Engine Stop Start, and the petrol engine will pump out 212kW. Peak torque should be around 350Nm. The diesel’s peak torque should be nudging 600Nm. Grunt gets to the dirt or tarmac via front and rear lockable diffs and sway bars with electronic disengagement. 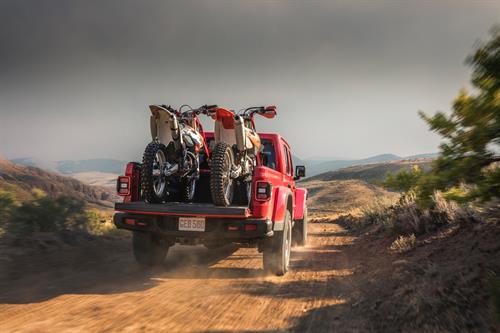 These go with a design line from Jeep: fit a 1.5m long tub, serious off-road chops, and carry a full sized spare wheel underneath the tray. That’s a hefty part of the brief, that last part, as in Rubicon spec the wheel’s overall diameter is 35 inches. And being Wrangler based, a removeable roof and doors, along with a folding forward front screen comes as part of the package.

Inside it’s standard Jeep, with a squared, blocky, design ethos. An infotainment screen of 7.0 inches or 8.4 inches will provide smartphone access and mirroring, and in the Rubicon will show pitch angles, plus a front facing camera shows the driver the forthcoming trail. This can be of importance as the length of the Gladiator means that agility may not be up to the standard shorter vehicles have. However, the Gladiator will have a ride setup at the rear that’s been adapted from the even bigger RAM1500, meaning that the jiggly ride a shorter wheelbase car may exhibit should be pretty much dialled out. Want to go “swimming”? The Gladiator will ford up to 30 inches.

The Gladiator is expected to have Autonomous Emergency Braking and adaptive cruise control, along with blind spot and rear cross traffic alerts. Warranty should be five years

Estimated prices are somewhere around $55K as a starter with a current estimated top whack of around $80k. Naturally these are subject to change. Register at Jeep Australia’s website for upcoming information. 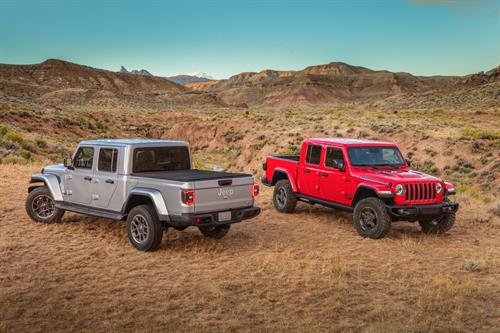