Hyundai recently released details of upgrades to its electric and hybrid small car, the Ioniq. It’s available as a hybrid, a plug in hybrid, and full battery pack power system. 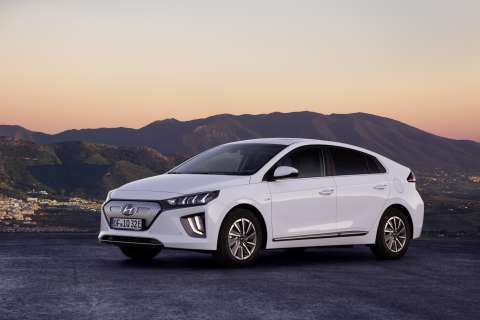 The fully electric version has had the battery capacity upgraded, which brings with it a range increase. It’s up from 28.0kWh to 38.3kWh, with a new mooted top range of 294km. Power and torque are rated as 100kW and 294Nm. The on-board charger has also been uprated, with an increase to 7.2kW from 6.6kW. This enable a charge to 80% from empty in approximately 54 minutes.

Ioniq Hybrid has been given a 32kW/170Nm permanent magnet motor for the rear axle, with partial power from a 1.56kWh made from a lithium-ion-polymer battery. The PHEV delivers 44.5kW, with peak torque of 170Nm. The battery pack is a 8.9kWh lithium-ion-polymer battery and backs up the 1.6L direct injection petrol engine. 103.6kW and 265Nm are the combined capacities, says Hyundai. Pure electric mode allows a top speed of 120kmh and up to 52km of battery only range. Transmission is a single speed for the Electric, a six speed dual clutch for the other two.

They also receive a regenerative energy system, and a new Eco DAS, or Eco Driving Assist System, which lowers energy usage and fuel consumption when areas such as intersections are being approached and speed is reduced. This works alongside PEMS, the Predictive Energy Management System, that oversees the battery recharge and discharge rates. This is specific to up and down hill roads, and adjusts the drive system on the fly, integrating the petrol engine and recharge system as required. 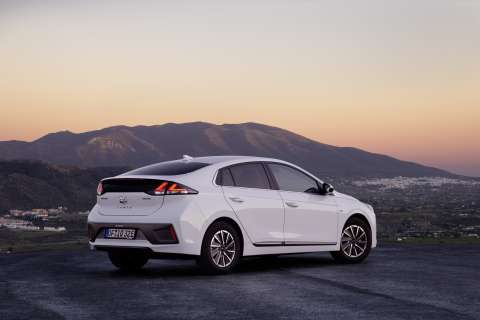 Safety has been uprated too. Pedestrian Detection and Cyclist Detection is standard now and packaged with Front Collision Warning and Avoidance Assist. Lane Keep Assist and High Beam Assist are also standard. A cool option is Lane Following Assist; this keeps the Ioniq in the centre of a lane in just about all forms of traffic situations, plus partners with Intelligent Speed Limit Warning to read street signs.

For the tech-heads, Hyundai have their Hyundai Blue Link, a connected to car system which uses smart device technology to allow remote access, check charge levels, and set air-conditioning. An update adds eCall, an emergency backup system that will contact emergency services if airbags have been set off or a specific emergency button inside the cabin has been pressed.

Android Auto and Apple CarPlay are on-board as standard, and accessed via a 10.25 inch display screen. An extra and welcome piece of tech is the ability to connect two Bluetooth enabled devices for music streaming. This sits above a redesigned centre console stack, with a redesigned aircon panel and upgraded finish. The IONIQ Electric’s standard high-resolution 7-inch LCD console display (optional for hybrid and plug-in hybrid versions) has been improved with mood lighting to visualise the different drive mode themes. To round off the improved modern interior design, blue ambient lighting has been applied across the passenger-side lower dashboard and the centre console. 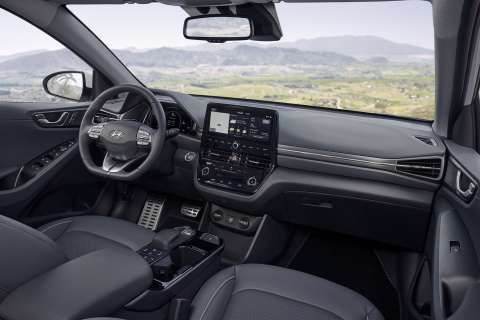 Outside the Ioniq has also been freshened. A refurbished grille design with a mesh-type look starts the party for the Hybrid and PHEV. The electric version has a closed grille and this has an updated pattern. The bumper up front and rear panels have been updated as well, with new running lights, colours, and LED powered front and rear lights. Wheels are 16 inch for PHEV and Electric, 15 or 17 for the hybrid.

With thanks to Trevor and Chris at eftm.com.au, here’s their long-term review of the current model:EFTM and Hyundai Ioniq

Hyundai says the updated Ioniq range will be available in the second half of 2019. 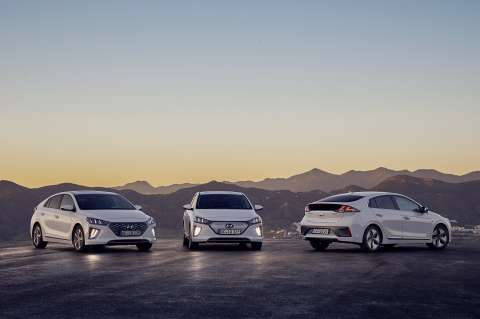