Subaru‘s Forester is now up to its fourth generation and still manages to be a small to medium SUV that has the uncanny knack of not looking like a small to medium SUV. With a powertrain that is now exclusively a 2.5L petrol fed engine and Constantly Variable Transmission, spread over a four trim level range, the 2019 Forester starts at $33,490 plus on road costs for the 2.5i. The Premium tested is $38,490 plus on roads (Subaru is doing a driveaway price of $43,300 at the time of writing) and it’s shaping up to be a hidden bargain in a crowded landscape full of SUVs. The 2019 range has been given an extensive makeover inside and out, with even the engine 90% new. A Wheel Thing drives the new for 2019 Subaru Forester Premium. 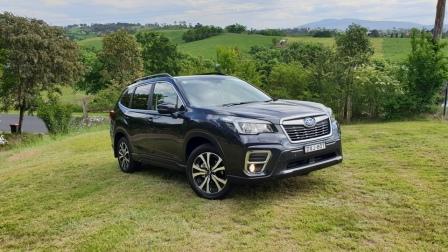 Subaru has loaded the Forester range with a good list of standard equipment across the range, and the Premium really lacks for little in this area. There are the standard electronic drivers aids, a few acronyms such as AVH, and a surprisingly possibly useful feature for those that do long country drives. By the way, AVH is Auto Vehicle Hold.

Power comes from a 2.5L petrol, as mentioned, as Subaru has dropped the diesel. However there are no current plans for a hybrid system. 136kW and 239Nm are the numbers for power and torque, with the rev points being 5800rpm and 4400rpm. The CVT from Subaru is one of the better sorted versions found and rarely did it feel out of sorts. A gentle throttle has the Premium moving away quietly and confidently. There’s then a more traditional auto feel as the CVT moves its way through the seven programmed rations, which are available for manual shifting via the gear selector or column paddles. 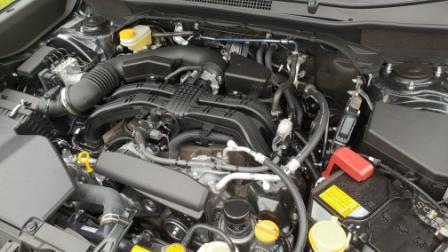 Heavier pressure on the alloy pedal send a signal through the fly by wire throttle and the Premium responds accordingly. There is a more typical CVT whir up the rev range, getting to around 3500rpm before settling momentarily. As the foot lifts or the sensors read that speed is where it needs to be, the revs drop off. The only time the CVT seems a bit off is coming up to a stop and throttle feedback seems to raise a shudder on the downshifts. It also gets uncertain, when cold, shifting between Park and Reverse, Park and Drive, or Reverse and Drive. In pretty much all driving situations otherwise, the combination of quietly throbbing 2.5L boxer four and a truly fine CVT does the job.

Economy for the Premium is rated as 9.3L/6.3L/7.4L (urban, highway, combined) from a 63L tank for every 100 kilometres covered. These are real world achievable figures and the Forester Premium didn’t disappoint. Taken on a sojourn from the Blue Mountains to Bega, on the south coast of NSW, and return, the Premium achieved 6.9L/100km. This was done over 1100 kilometres and with a four human passenger, one canine passenger, and cargo load. Considering this takes the 1546kg (dry) machine to over 1800kg, it’s a better than decent figure. 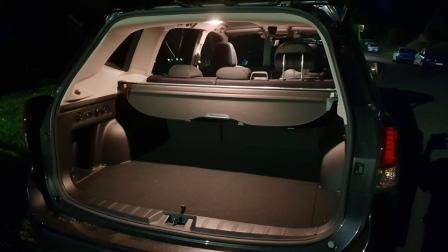 The cargo section itself in the Premium is a minimum of 498L, and this goes to 1768L. Access is via a powered tail gate with height memory function and Subaru have relocated the light to the roof. There are shopping hooks and a 12V socket here also. The loading bay is at an easy to lift and load height. The doors are wide opening for easy access and the front seats are powered, plus a two position memory for the driver is here. Rolling stock for the Premium are 18 inch alloys with Bridgestone 225/55 Dueler rubber. 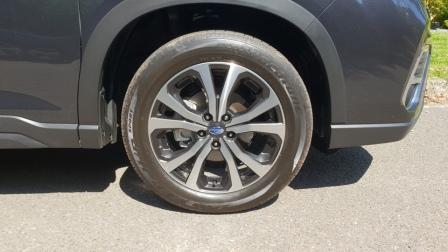 What isn’t immediately noticeable is the physical change to the Forester. 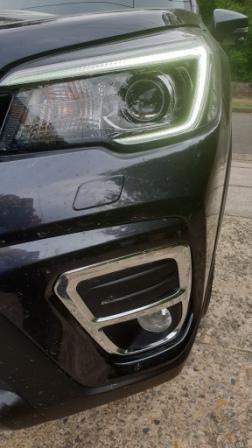 Although looking virtually the same as the preceding style, there’s been growth in all dimensions, from height, width, length, to interior measurements. The headroom for the passengers genuinely feels overdone, with close to what feels like twenty centimetres of headroom. The cargo capacity, for example, has jumped by 78L. The floor width has gone 58mm wider, nearly an inch taller at 22mm, and the opening width has gone up by a massive 134mm to 1300mm. Up front Subaru’s designers have continued the “C” LED look, with splashes of chrome for the lower corner globe driving lights. The rear goes Euro too, with the tail light cluster also a strong “C” motif. 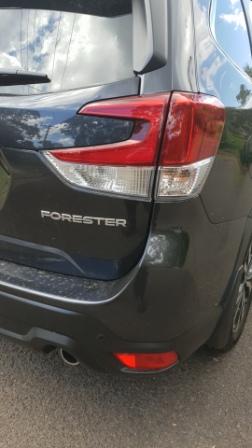 Inside the Premium it’s almost business as usual with the triple LCD screens and the huge amount of information available. It’s a look that echoes the Europeans, with a sweeping arch that starts and ends in the upper door plastics. the trim in the Premium is classy, with a mix of smooth and rippled plastics, and the seats are cloth with leather bolsters. No heating or venting, though. 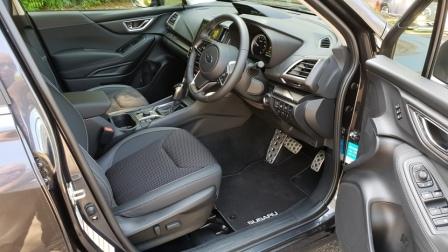 The driver has the small screen in full colour, with variable info accessed via tabs on the lower left quarter of the tiller, whilst the eight inch touchscreen features Subaru’s StarLink setup. Apps such as Apple CarPlay and Android Auto are standard as is satnav in the Premium. Above that is the smaller screen that show information such as average and on the fly fuel economy, car angle relative to the horizontal and it’s in a casing that hides a nifty little feature. 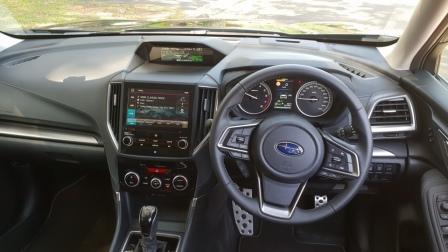 It’s almost invisible but look carefully and a small red rectangle can be espied. It houses an infra-red scanner that reads the driver’s eyes, and will flash a message on the screen if the driver appears to be looking away from forward for too long. It’s an extra safety feature that is intended to monitor for fatigue or inattention, and the scanning feature works very well. It also provides an extra feature as it has a facial recognition basis, meaning that a little bit of personalisation can be added, as Subaru provides a Welcome (insert name) on the screen. 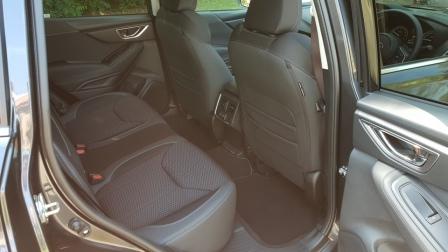 There are plenty of other safety features in the Premium, such as Subaru’s much vaunted EyeSight camera setup. This provides an excellent stereoscopic forward view and goes hand in hand with the Forward Collision Warning, Adaptive Cruise Control, and the very handy Lead Vehicle Start Alert. Naturally Autonomous Emergency Braking is standard too and comes with Pedestrian Detection. Tyre Pressure Monitoring, DAB radio, and Subaru’s X-Mode drive selector finish off the list of features.

Here’s another acronym. SRH. Steering Responsive Headlights is what that one stands for and that’s self explanatory. It really isn’t until you’ve driven a car at night with this feature that you realise just how handy it is. The car itself looks similar yet different to the previous model. Along with the subtle increases in size, the nose itself is taller, bluffer, more upright. The Forester is like the Outback in one key area as well. Subaru’s design team build in a station wagon look yet it really is as big as other SUVs in its class such as Nissan’s X-Trail. 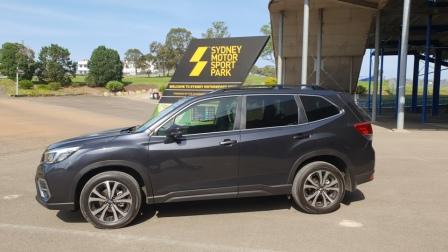 This was important on the drive to Bega and back. With two in the back utilising the pair of USB ports, a few towels down for the pooch, and the cargo area reasonably full, the extra space becomes welcomed. And it’s a fair handler too on the long, sweeping, turns of the Monaro and Snowy Mountain Highways. The steering weights up progressively, with the long and gentle turns needing only miniscule corrective input.

Come into the tighter, closer together, corners just west of Bega after the magnificence that is Brown Mountain, and the ratio in the steering means just a little extra work is required. It’s communicative and subtle in its method. The suspension is well balanced in how it damps down on these roads too. There are some sections where it’s like riding over a gentle swell again and again, and the Premium simply dispatches these to the boundary like Bradman did in his heyday.

Drive into the turns that populate Brown Mountain, around a half hour or so west of Bega, and the Forester’s handling gets tested and found wanting for little. It’s a ten kilometre stretch of road and drops something like eight hundred metres as you drive east. The turns measured at 25 to 30 km/h simply don’t faze the the Premium; there’s a gentle dab of the brakes, a turn, a squirt of the go-pedal, and the Premium eats the road up.

At The End Of The Drive.
Subaru’s dedication to their all wheel drive platform and boxer engine make them unique in the world’s automotive family. They’re still a niche player but it’s become a bloody big niche judging by the number of Foresters seen during the review period. 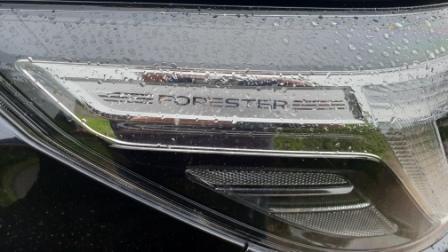 What really wins here is the sheer value of the Premium. Although there is a trim level above, it’s perhaps worth considering what the differences are here. The 2019 Subaru Forester Premium is an impressive car and continues to make Subaru’s once quirky niche presence bigger and bigger.

Be the first to comment on "Car Review: 2019 Subaru Forester Premium"