Holden‘s 4WD ute and people mover range has had a chequered history, with the latest incarnation of a ute based people mover now known as the Trailblazer. Once known as the Colorado 7, it’s a curious choice as the front end looks like the current Colorado, the interior looks like the Colorado’s, and the profile is effectively unchanged. Perhaps to separate the two lines more effectively? The Trailblazer comes in seven colours, two and four wheel drive, three trim levels (LT, LTZ, Z71), and seats seven in relative comfort. 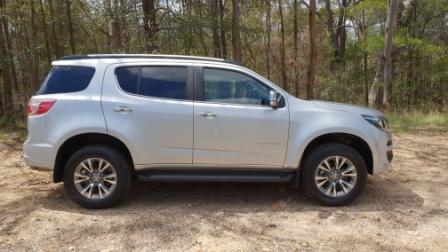 The Trailblazer LTZ, at the time of writing, is $53,990 driveaway. Premium paint is a $550 option. There’s plenty of standard kit to come with that price, too like auto headlights front fog lights, and powered folding mirrors . Sound wise there is a DAB tuner, and smartphone connectivity via both Android Auto and Apple CarPlay. Holden’s MyLink is a user friendly interface on the eight inch screen. Safety is delivered in the shape of Forward Collision Alert, Lane Departure Warning, Blind Spot Alert, and Rear Cross Traffic Alert are standard on the LTZ. No Autonomous Emergency Braking though. The range also gets seven airbags including the driver’s knee ‘bag. With towing of up to 3,000 kilograms available having Trailer Sway Warning is standard too. However the large tailgate is not a powered version and that’s an item found on cars of similar or lesser value. But there is Remote Engine Start for those that like to pre-cool or pre-warm the interior.

The front pews are covered in machine made leather and are heated, not vented, again an oversight for Australia’s climate. The driver’s seat is powered but really only adjustable for height and fore/aft. The dash itself is squared off and lacks in visual appeal. A flat fascia, rather than the Euro style wrap around that even the new Forester has adopted leave the Trailblazer’s design well behind. A bright spot is the vibrant and easy to use touchscreen. It responds rapidly to touch, has a sensible layout, and the DAB tuner is sensitive enough but the speakers lack real depth, with a lack of soundstage quite noticeable.

A mix of dark and light greys and a lustreless alloy look trim around the gear selector and centre vents just don’t pull in the eyeballs. The front seats can see a 12V and USB socket, with the middle row getting just the single 12V. The rear seat passengers have access to cup holders on both sides and in the centre. There is a 12V socket on the left side and there is rear seat aircon as well, with roof vents and a switch in the front centre console for On/Off. The driver’s dash and switchgear are familiar GM in look, feel, and operation, with the multi-function tiller itself sporting simple to use buttons for audio and cruise control.

Leg room up front is plentiful at 1045mm, as is the mid row seats, thanks to the 2845mm wheelbase. Use all seven seats and cargo space is a relatively small 205L. Use it in the more likely five seater mode and there is 878L in total. With all seats down there is up to 1830L to use. The seat are adequate for most people in size, shape, and support. The squab or the bumrest, seemed a little lacking in support for the thigh towards the front of the seat but a compromise of seat position and angle was sufficient to deal with it.

Power and torque are courtesy of a 147kW/500Nm diesel of 2.8-L in capacity. Economy came in at 8.6L from the 76-L tank for every 100 suburban kilometres driven. The diesel is more agricultural sounding than others under load but off throttle it’s quiet enough. That 500Nm is rated at being available between 2000 to 2200 rpm but there is oodles on tap both below and above that up to around 3200rpm. 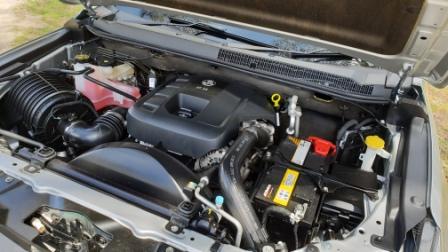 Standard transmission is a six speed auto which means that Holden is behind the market here by not offering an eight or nine ratio ‘box. The four wheel drive models have a “shift on the fly” selection choice which is available via a centre console dial. With 500 Nm to play with a transmission able to really utilise that amount of torque would be better and just six cogs isn’t enough. Having a kerb weight of just on 2200kg matters too. The six speeder is a slick unit being mostly smooth in its changes, will hold gear nicely on downhill runs, and when the accelerator is punched it’s boom boom boom through the ratios. An eight or nine speed auto though would offer a better spread of ratios, making the Trailblazer more driveable overall, and potentially contribute to an even lower consumption figure.

On road behaviour is refined enough given its ostensibly ute based origins. The LTZ tested has meaty rubber from Bridgestone at 265/60/18 and on tarmac they provide plenty of grip. It’s a coil sprung front, with a double wishbone design. The rear is a five link “live” or non-independent setup. It has the effect of the Trailblazer feeling noticeably but not unpleasantly tauter than the front. It feels a tad soft at the top of the suspension travel, which given its off-road ability is understandable. With 28 and 25 degree approach and departure angles, it provides a chance for most average drivers the ability to trial the high and low range transmission ability.

Steering on tarmac is not as tight as expected, with a slightly rubbery feel on the straight. Off centre it loads up quite well but never feels as if winding it on actually has the nose just where it feels it should be pointing. On gravel the suspension allows a little more communication to be fed through.

The brakes themselves also lack enough bite to suit the mass and payload. Coming up to red lights or stop signs, it felt as if the Trailblazer wasn’t being hauled up as rapidly and confidently as it possibly could do.

The exterior design is not up to the visual appeal that a Santa Fe or Sorento offers. Ford’s Everest is also a better looker, for that matter. The profile is a standard three box design and is somewhat more squared off than the immediate competition in profile. Up front is the sharper looking nose design with plenty in common with the Colorado, with a more integrated grille and LED driving light design. The rear of the Trailblazer has the D pillar forward of the tail gate, with the window almost superfluous as a result.

At The End Of The Drive.
With the release by Holden of the petrol only Acadia, a stand alone, non ute based seven seater, Holden can offer a choice of bigger people movers. The Acadia is a US sourced machine, and being petrol only hands the economic advantage to the Trailblazer. Having said that, the 2018 Holden Trailblazer LTZ feels old and tired already, in looks, feel, and driveability. It’ll do the job but against Hyundai and Kia, then Audi, Volvo, and the like, it suffers straight away. Make up your own mind by booking a test drive here