Great Wall first landed in Australia in 2009. It was a range full of petrol engines and manual transmissions and sharp pricing. However, quality was questionable and it wasn’t long before the brand was withdrawn. Fast forward a few years and the Great Wall brand features three variants in a four door crew cab design, a petrol or diesel 4×2 and a diesel 4×4, priced from $29990, driveaway. A Wheel Thing trials the 2017 Great Wall Steed 4×4 diesel to see if things have improved.

Engines wise it’s a choice of a 2.4L petrol or 2.0L diesel, as tested. Both come with a manual, being a five cogger for the petrol and six for the oiler. The transmission itself in the Steed is typical manual; a reasonably light throw, a tad notchy, a sensible gate so you’re not hunting for the slot and there’s a simple push button based high/low range system. It is, however, mated to a living definition of time travel, backwards time travel. Great Wall quotes 110 kilowatts of power and a lowish 310 Nm of torque between 1800 to 2800 revs from the two litre engine… that’s substantially less than a good portion of its competitors.

In order to get the Steed underway, a little slip of the clutch and a judicious prod of the go pedal are required, needing around 2000 revs to move it along with something approaching acceleration. It genuinely feels like an old school diesel, with nothing below 2000 and a cliff fall once you see 4000 rpm. It’s breathless, ragged, lacks urge and is defintely old school with the rattle. It also means that some uphill runs require constant downchanging, providing some good exercise for the left arm. However, on the freeway, the gearing means that it will happily pootle along right in the torque band.
It’s frighteningly thirsty though, with a final consumption figure of 9.7 litres of dinosaur juice being ingested for every 100 kilometres driven. That’s not great even allowing for the 1740 kilogram weight.

The steering is also…unusual. What’s called lock to lock describes the process of winding the steering wheel from one side through to straight ahead to the other side. The Great Wall Steed is something close to five turns. What this means is a turning circle a battleship would be embarrassed to show and some serious arm work to engender directional changes. A half turn sees minimal left or right movement and you need, as a result, to wind on more lock to really see anything happen.

Ride quality from the double wishbone front and leaf spring rear is also iffish. The Steed is too hard when it needs to be softer, and too soft when a firm and taut ride is needed. It’ll skip sideways too easily, thumps over the small metal speed bumps in shopping centres, crashes on the front when going over the bigger speed bumps, and just doesn’t seem to track straight and true on the freeway. In all, it’s a somewhat frustrating drive and ride experience.

Outside it is handsome enough, with a number of positive comments from passers-by and colleagues. In profile it’s clear the car has been sourced from an Isuzu desgn, with the nose cone being given a thorough massage to ensure a clear GW identification. There’s a solid grille with five horizontal bars, a pair of LED driving lights inserted in each far corner of the bumper assembly, headlights not unlike that found in Holden’s Colorado, indicators in the wing mirrors and sitting in the middle of the 3200 mm wheelbase a pair of sidesteps. The rear bumper stands proud of the rear bodywork and adds a bit of extra length to the overall 5345 mm. There’s an approach angle for the alloy section in the front bumper of 25 degrees and a handy 21 degrees departure angle. Towing? 2000 kilos, braked. 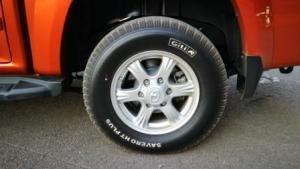 Tyres are 235/70/16 from Giti and are of a semi off-road capable tread design. They may also contribute to the skittishness of the Steed’s handling. What may also contribute is the one tonne cargo carrying capacity tray was unladen throughout the review period. It’s an almost square tray at 1545 mm long and 1460 mm wide and there’s 480 mm of depth. The test car came fitted with an alloy roll bar as well plus the tray was lined with a polyurethane liner and fitted with tie down points. 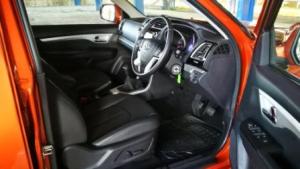 Inside is where the Steed picks up some points. The slightly flat and slabby leather seats are heated, with the driver gaining simple electrical controls to adjust their pew. The overall presence is pleasant enough, with a basic but legible monochrome info screen between the uncomplicated dials; a touchscreen that is ssslllloooowwww to load the navigation system and looks peculiarly Asian in layout and colour scheme.

Audio is standard AM/FM with Bluetooth and auxiliary inputs but you can watch DVDs….actual audio quality was ok, with a slightly boomy bass at levels that would normally sound tight and punchy. The rest of the dash and console is uncomplicated, ergonomically friendly, and of a pleasing enough quality throughout the cabin to appeal to most in the market.

Safetywise the Steed features a reverse camera, which didn’t always engage, six ‘bags, pretensioning seat belts, stability control, hill start assist (which holds the brakes momentarily) and, surprisingly, tyre pressure monitoring. Blind spot monitoring, lane keeping alerts and the like aren’t available. However it still rates not terribly well for the ANCAP scoring, with a two from a possible five ponts when lasted tested. Warranty is a standard three years or one hundred thousand kilometres, and servicing starts at six months or five thousand kilometres. It’ll then move to 12 months or fifteen thousand after the first service. 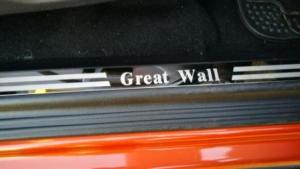 At The End Of the Drive.
The 2017 Great Wall Steed, on its own, would be an ok vehicle for a private buyer or even a fleet buyer. However it needs more to really be a consideration, more as in refinement of the steering ratio, more in the torque, more in the fettling of the ride. It’s inside that the Great Wall Steed scores ponts, along with a not unattractive exterior. However, if price is a consideration, as it was in 2009 when A Wheel Thing worked at a dealership that sold Great Wall, then 30K driveaway will dull the headache.
Here’s where you can find out more: 2017 Great Wall Steed diesel crew cab 4×4