This Car Review Is About: Four cars that are the same but different. In late 2019 the Korean companies of Hyundai and Kia released their new, small, city aimed SUVs. Hyundai named theirs Venue, Kia chose Seltos. 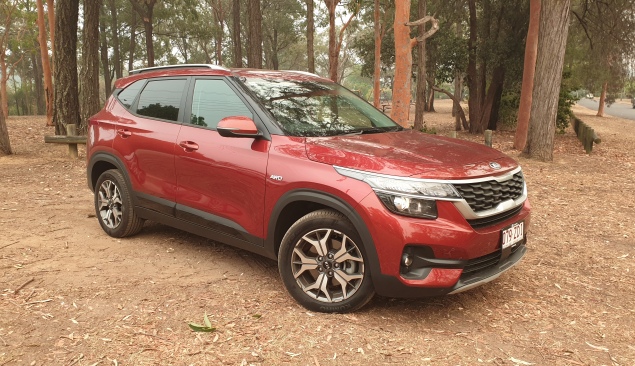 Both brands went with a four tiered structure. Hyundai has Go, Active, and Elite plus there is a Launch Edition as well. Kia has S, Sport, and Sport+ sitting under the GT-Line.

Where the two basic exterior designs are obvious in relationship, being a stubby bonnet, steeply raked windscreen, wide opening doors, and pert rears, both have their own distinctive stamp. That carries over to the interior look, engine choice, and suspension tune.

Transmission choice for Hyundai is simple with a six speed auto or six speed manual for the Go and Active. Kia has a CVT for all variants bar Sport+ and GT-Line. There’s a dual clutch auto here instead. All Venues are 2WD. The Sport+ with 1.6L is a part time AWD. 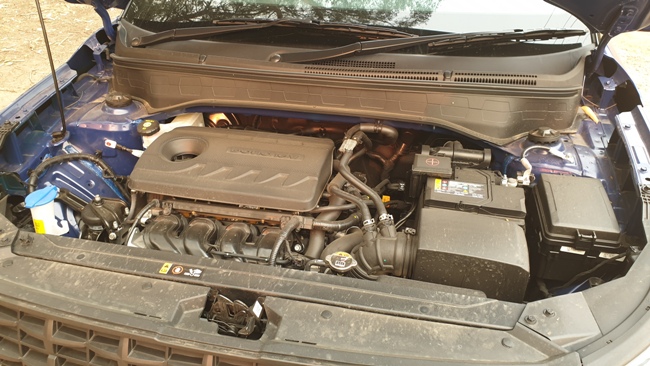 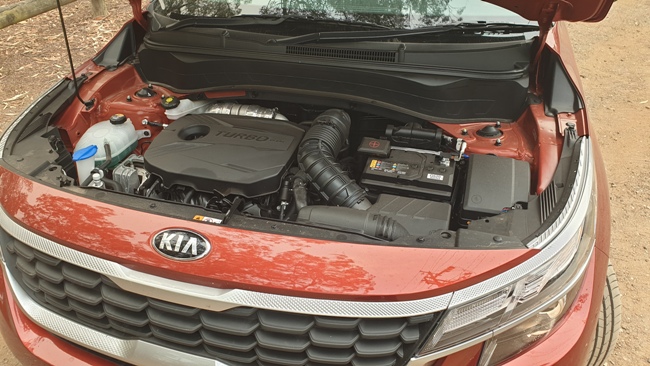 On The Outside It’s: A more subdued look from Hyundai, whilst Kia goes for more visual pop thanks to a front bar with fins either side of the slimline grille, and light clusters at each end that evoke Evoque thanks to the swept in wings on the top of the clusters running into the fenders . The lower quarters of the front bar have inserts for driving lights.

Hyundai’s design is quietly appealing, with the headlights, like the Seltos, set mid-height in the front bar. These wear LED driving lights as halos and are separate to the LED strip lights under the full length bonnet. The lower section of the front bar has coloured inserts.

Kia’s styling has the headlights and driving lights in one cluster, again with the main lights set at mid-height. The overall design is busy in comparison to the Venue’s design. Kia also has their trademark bonnet design with a leading edge section holding the badge.

The rear roofline separates the two as well. Venue has a thick C-pillar and the roof leading into the tailgate. Seltos goes for more glass here, and the tailgate reaches up and into the roofline. Both have a slight upwards kink to their respective rear doors.

The colour palette shows more sparkle from Kia too. The S was a bright bronze-green called Starbright Yellow with the Sport+ a deep burgundy hued metallic red called Mars Orange. Both Hyundais had blue, with the Go a rich, almost navy blue called Intense Blue, and the Active a more aquamarine metallic. The name? “The Denim”. 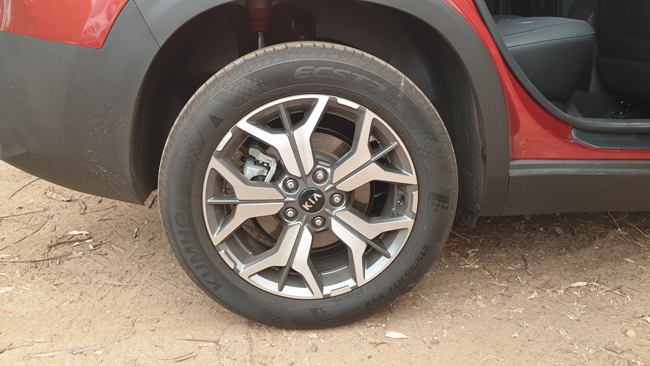 On The Inside Is: A variety of looks. The Hyundai design team has opted for a stripped back presentation for the Go and Active. The Seltos S and Sport+ have an immediately upmarket look and feel. 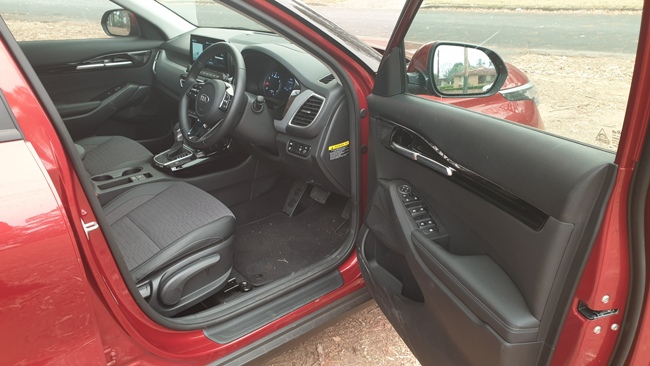 The Go and Active have cloth seats, and there are individual looks. The Go has white piping in an almost electrical grid sheet layout and the Active a pair of colour coded GT stripes. The Seltos S has charcoal bolsters and a herringbone grey in the middle, whilst the Sport+ has leather bolsters with a dark grey cloth weave.

Inside the Active and Go is an efficiently laid out dash design. Vents reflect the headlight surrounds with a rounded corner edge shape. There is a dull chrome look on the steering wheel’s lower section and around the dear selector. A drive mode selector is located here, whereas in the Seltos it’s further up and to the side of the selector. The Kia’s feel has more torsion in the twist, the Venue’s lacks any need to apply force. The Venue though offers traction control with Snow, Mud, and Sand, an odd thought given it’s a front wheel drive only vehicle. However the Venue’s spec sheet says there is also variable one touch indicators, at 3, 5, or 7 flashes. For safety’s sake it should be 7 and 7 only. 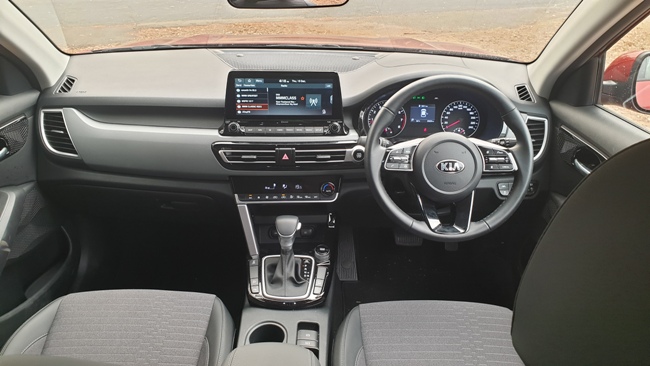 It’s the plastics and layout that mark the Seltos as having a more upmarket look. There’s a different sheen, a different hue, a different tactility to the materials used. There’s a grab handle on the left of the gear selector, the touchscreen is the more favourable looking separate to the dash configuration, and the dash dials are a more elegant monochrome look. Even the speaker covers have a different look, with a pyramid motif for the gloss black metal. 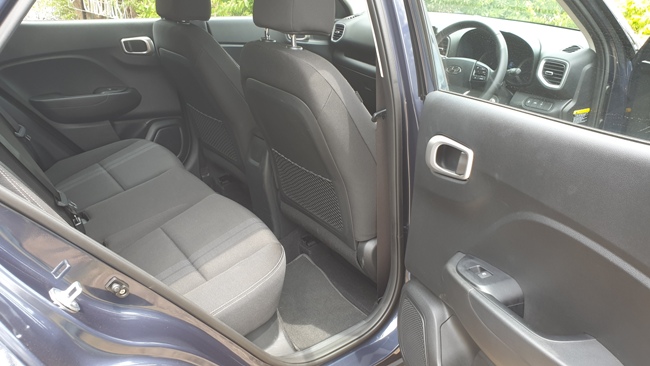 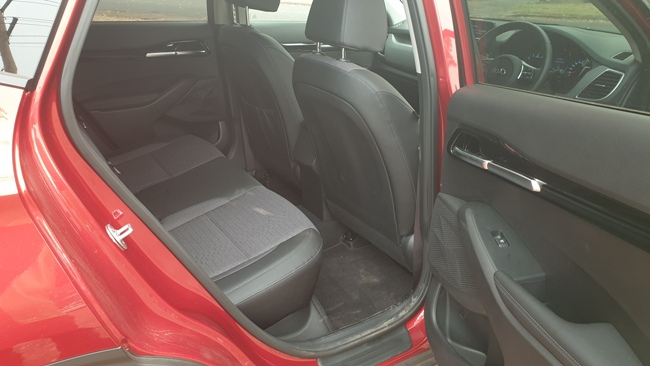 Aircon controls for the Venues are rotary dial. The Seltos S has the same, the Sport+ has push button . The Kia’s console is wider and holds push buttons for Hill Descent and Parking sensors off in the S, a diff lock and camera for the Sport+. The Go misses out on warning sensors for reverse parking at the rear, an odd oversight even with a camera as standard fitment. All four Seltos get rear parking sensors. Audio is AM/FM in the Go and Active, whilst the Seltos S is the same. It’s the orphan in the Seltos range when it comes to DAB but with Bluetooth streaming plus app compatibility, DAB streaming won’t be an issue. The Sport+ also offered a wireless charge pad.

Cargo for the Seltos is rated as 433L to 1,393L. Hyundai lists only the rear seats up figure and it’s smaller than Seltos at 355L. The Venue Go also lacks a centre console storage box, whereas both of the Seltos had it. 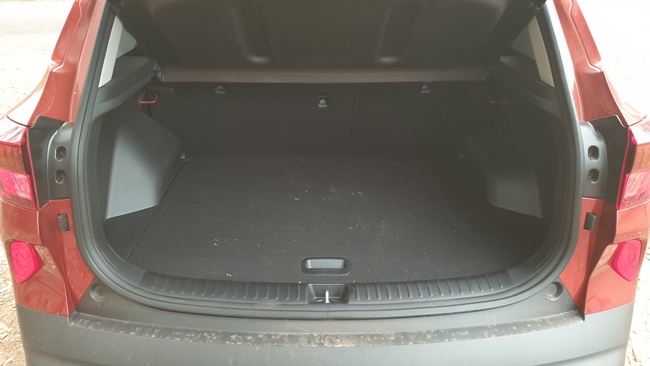 On The Road It’s: A really matter of choice. The Kias run more tautly than the Hyundais, with the Seltos pair feeling more as if the tyres are brought into play to assist in compliance and absorption. The Hyundais have a softer tune, noticeably softer, but not so that they wallow or flop around. It’s actually at times a preferred ride to the Kias, with more give in the ride and therefore somewhat less intrusive.

The 1.6L in the Venue range is a willing and energetic unit. Given the power and torque outputs it has no right to be highly regarded, yet after having the Go and Active autos for two weeks back to back, they showed no sign of underperforming, no indication of being “the little engine that couldn’t”. AWT came away after the review periods more than impressed as the cars slowly grew on us and finished with a positive impression.

The Seltos 2.0L naturally exhibited plenty of spirit as well. It’s a powerplant that shares verve and vitality with the Hyundai’s liveliness. The extra torque provides a more useable drive experience than the still sprightly 1.6L in the Venue, naturally, and didn’t overwhelm the CVT either. The DCT and 1.6L is just as equally well behaved, and the DCT is quite well tuned in the clutch change, at standstill, from Reverse to Drive, with less of a break in transmission engagement. It also has plenty of punch when required, with that flat torque over a 3,000rpm range making highway driving and safety in overtaking efforetless.

The 1.6L Venue requires more of a heavier foot to elicit something approaching similar performance, but it never disappointed. Uphill driving was the only (barely) weakspot with manual downchanges to take advantage of the engine’s willing and revvy nature required. Brakes across the board, as was steering, could not be faulted for both cars.

What About Safety? The Seltos comes with or without a safety pack and in honesty there’s not a lot of difference. AEB (Autonomous Emergency Brake) with FCWS (Forward Collision Warning System)- Cyclist Avoidance is probably the biggest notable change. There is a slightly different Driver Attention Alert for the safety pack in the S, but the S does miss out on BSD (Blind Spot Detection) with RCTA (Rear Cross Traffic Alert) & LCA (Lane Change Assist) plus Rear Cross Traffic Alert. There are also no front sensors.

The Venue Go and Active dip out on Blind Spot Collision Warning and Rear Cross Traffic Alert. They do get the same Driver Alert Warning which beeps to advise the car ahead has moved on. Forward Collision-Avoidance Assist (FCA) – City/Urban/Interurban/Pedestrian (camera type) and Lane Keep Assist are standard though. All four had the usual safety systems including six airbags.

What About Warranty And Service? Kia’s still a class leader with a standard seven year warranty. Hyundai offers five as standard and until December 31, 2019, was offering seven for cars delivered by then. More on the servicing structure for Kia is on their website. Hyundai’s serving information is also on their website.

At The End Of The Drive. One on one, the Seltos outweighs the Venue in all areas bar one. The emotional tie factor. The Seltos has looks and driveability that appealed more yet the Venue never gave up in efforts to gain respect. It’s slightly smaller overall, doesn’t have the same engine flexibility, and could be considered somewhat dowdy to look at inside and out, yet it still gave its considerable all. Although the preference for AWT would be for the Seltos Sport+ (and probably the GT-Line), the Venue is by no means a loser simply because it does what it does quietly, efficiently, and and at 100%.