This Car Review Is About: A slight revamped version, for 2020’s Model Year, of the top of the tree Exceed from the oddly proportioned and oddly named Eclipse Cross. The range itself had minor updates, such as the LS gaining the S-AWC, or Super All Wheel Control, drive system. The Exceed has some trim changes, with revised front door trims with illumination and a black interior headlining. Mitsubishi have also joined the club when it comes to offering a “Black Edition”. This adds in a front skid plate, black front bumper and radiator grille. There is also a black interior and black spoiler. Safety goes up a step with variable auto rain-sensing windscreen wipers, dusk sensing headlamps with auto high beam, fog lamps and forward collision mitigation.

Under The Bonnet Is: A surprisingly small “donk”. It’s just 1.5L in capacity, drinks petrol only, and there is no hybrid option currently. It does have a turbo though, and that means there’s decent torque. In fact there is 250Nm from 2,000rpm to 3,500rpm. Peak power is 110kW at a typically high 5,500rpm. Fuel is 91RON or above, with economy quoted as (combined cycle) 7.7L/100km. That’s a figure we achieved and beat in our mainly urban drive cycle, with 6.7L/100km recorded. That’s a good figure considering it’s not a big vehicle yet starts at 1,555kg before any load and fuel.

Drive was put to all four paws via an eight ratio CVT. It’s one of the better examples of a CVT and possibly due to not being overwhelmed by torque so much compared to bigger capacity, higher torque, engines. There was a notable lack of slippage in comparison to some of the CVTs we’re driven recently. By the way, Mitsubishi no longer offer a diesel in the Eclipse Cross.

On the Outside It’s: Awkwardly shaped. There’s no polite way of saying otherwise. It sports the “shield” front end treatment and LED headlights, however in profile and from the rear it’s….angular and somewhat out of proportion. The 4,405mm length hides a 2,670mm wheelbase, a high 1,685mm stretch from top to bottom, and 1,805mm in width. From the rear the glass is split horizontally and right in the eyeline of the driver.

That wheelbase and length have a relatively normal looking profile from the nose to the rear of the passenger door, but then there’s a vertical rear that then folds forward over a truncated cargo section of sheetmetal. It’s not really helped by a long, straight, windowline that comes from the upper corner of the headlights and terminates just over a deeper crease line that starts mid-front door. This itself finishes at the base of the rear lights that also fold forward with the metal. The wheel arches offset this by being clad in the now familiar polycarbonate.

Above the driver is a glass roof, with a fixed panel for the rear seat passengers. It’s needed as the interior trim is black on black. Underneath are a set of 225/55/18 tyres from Toyo. They’re compromise tyres, so mainly for road, not off-road. Speaking of which, approach angle is just 18.8 degrees, with a departure angle of 29.6. That’s largely thanks to the squat arse it has. Ground clearance is 175mm, so if the plan is to get hot and heavy with anything other than the occasional puddle and speed-bump, this isn’t the faux off-roader for you. 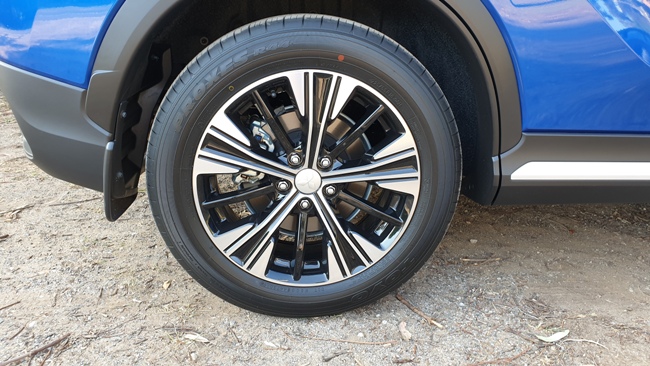 On The Inside It’s: Not uncomfortable. Leather seats, heated (not vented) up front and power adjustable for the driver’s, Head Up Display, four cup and bottle holders, start the party. DAB audio/Android Auto/Apple CarPlay are on board but via a very confusing layout on the 7.0 inchtouchscreen. We’re far from technologically impaired but when a need to consult a manual to find out how to store a radio station is required…The screen is high-definition, making the 360 degree camera views crystal clear.

The tiller and gear selector have leather covering as well, and the plastics have a nice soft touch under the fingertips. All four windows are one touch up/down, and ignition is Start/Stop push button. There’s alloy look plastics to provide a bit of brightness around the centre console, airvents, and dash binnacle. Contrasting gloss piano black is on the door handle surrounds and the touchscreen. Outside, the wing mirrors can be power folded and they’re also heated.

Roomwise there’s enough. 1,003mm of headroom up front, 933mm in the rear means a feeling of spaciousness. Leg room is ample too, with 1,039mm and 897mm front and rear. Again, it’s needed with the black on black trim possibly feeling a bit claustrophobic. At least a shrug of the shoulders shouldn’t upset anyone, not with 1,428mm of space up front. Somehow Mitsubishi cram in 374L to 1136L of shopping space in the back. It’s JUST enough for the family average shop. BUT the rear seats may need to be called in as an assistant. 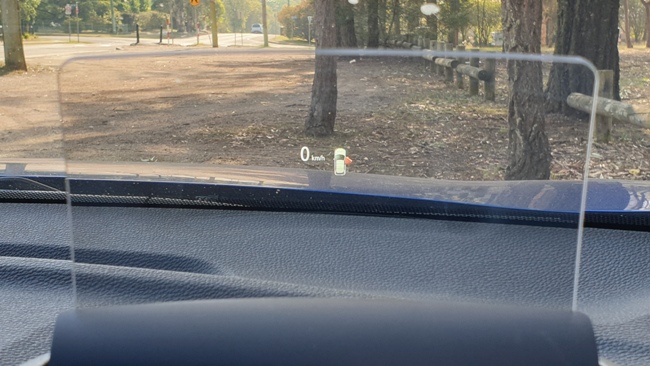 On The Road It’s: Not a sparkling performer. That’s unsurprising given the size of the powerplant and the dry weight. But it’s not a slug, as such. Rapid, no. Adequate for Nan? Utterly. But this isn’t the kind of car that Nan would look at. This is for those that will look at the ASX and deduce it’s not right for them. It’s slightly bigger in presence and being petrol only it lacks the low down punch that a good diesel, even a small one, can deliver.

The upside is that the CVT really is one of the better ones. Because the turbo eases delivery in, the constant variable transmission doesn’t have that slippage feeling so commonly found elsewhere. This translates to a better driving experience as a result. And using the manual shift imbues the Eclipse Cross Exceed with a little more dynamism, a little more verve. The S-AWC helps somewhat, with the torque being distributed front to rear as required. But it’s not heavily front wheel biased in steering feel though. It’s also not light enough that a finger twirl elicits results, with a bit of heft required to get the front wheels angling.

It’s well tied down, with a ride that sets it apart from the competition. It’s flat on all but the most unsettled tarmac, with the dampers really in control. Absorption of general road irregularities is up there with the best. There’s no pogoing, no floppiness, it’s a tightly written composition underneath and confidence inspiring as a result. When it’s wound up it’s actually a fun little machine to take into some of the lovely curvy roads in the region. When the engine’s into its stride, it handshakes beautifully with the steering and suspension to get into an almost sporting mode.

Warranty And Service? Five years warranty or 100,000 kilometres is their standard. It’s good but doesn’t quite measure up against those offering the unlimited kilometres offerings from competitors. However, new 19MY and 20MY Triton go the extra mile with 7 Year / 150,000km Mitsubishi Diamond Advantage New Car Warranty† when purchased before 31st December 2019. Mitsubishi says the capped price servicing covers: all items specified under the regular service tables for each vehicle type detailed in the service and warranty booklet, including parts, labour, oils and fluids, workshop supplies and any applicable environmental or waste oil disposal charges. Pricing can be found here.

At The End Of The Drive. The Mitsibishi Eclipse Cross range provides a solid, if unspectacular option to vehicles such as Hyundai’s Tucson, or Kia’s Sportage. It’s a quirky looker, reasonable if familiar in its unspectacular interior and dash layout, and not an uncomfortable place to be in either. It’s dependable, and drives well enough. There’s enough, as expected, room for four, plenty of safety to protect the occupants, and, difficult to follow DAB screen aside, a user friendly environment in the equipment sense.

The engine is a reasonably willing unit, and the CVT is a well sorted unit for the engine’s capabilities. As a whole, the package is good enough for those that have chosen to buy it and that’s the end result Mitsubishi would hope for. The 2020 Model Year Eclipse Cross information can tell you more. 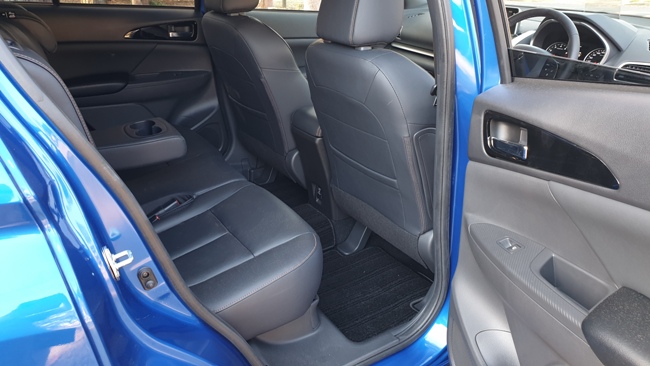