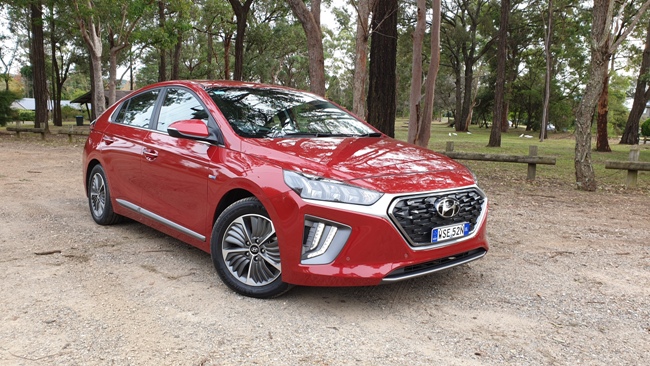 This Car Review Is About: Hyundai’s tilt at a mainstream PHEV or plug in hybrid vehicle. It sits below the purely electric Ioniq and above the standard hybrid.

Charging options are: charging station is $1995, cable for public charging is $495 and an emergency cable is $799. 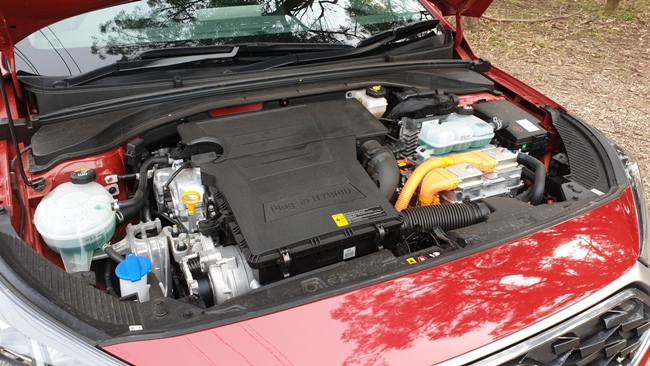 On The Outside It’s: A sleek looking five door hatch. It’s more a liftback in look than a “traditional ” hatch, with a shortened tail in a coupe style. In overall presence it’s around i30 in size but has little obvious physical resemblance to it. The wheels have a turbine blade design to them to help funnel air and aid aero. They’re 205/55/16 in size, with rubber from the Michelin Energy range.

Lighting front and rear is LED, with a three chevron motif at the rear. The front lights are a slimline design and bracket a familiar but different Hyundai grille. The driving lights are LED, of course, and in a front quarter angle the forward pair of the three in the headlights join, vertically, the pair in the lower corner inserts. In profile it evokes the “grandfather” of hybrid hatches, the Prius.

The battery charge port is up front on the left with the fuel tank port on the left rear flank. Fuel tank capacity is 43L.

On The Inside It’s: A startling mix of high tech and basic Hyundai. For example, the buttons around the gear selector are standard Hyundai. The tiller looks the same, and comfort comes from the heated and vented front seats. The touchscreen is standard Hyundai, however it includes a cool looking display for the way the petrol and battery systems work together to distribute power. 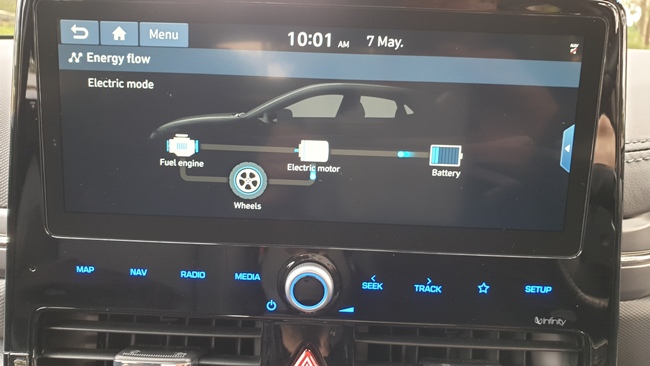 The touchscreen also displays the nearest charging stations, plus has DAB, Android and Apple apps. For the driver, the display is a full width and full colour LCD affair, and looks fantastic. It eschews the traditional speedo and tacho look for a more contemporary and modern look.

Piano black plastic suits the look of the Ioniq, with the 10.25 inch touchscreen and aircon surrounds clad in it. The aircon controls themselves are more of a tactile soft touch which adds to the semi-futuristic look of the Ioniq.

On the left is the usage indicator, as in whether the engine system is charging or running on battery power. To the right is the battery and petrol levels. Front and centre is the extra information such as speed, or eco usage. There are paddle shifters on the column but these don’t change ratios, instead they change the amount of resistance for regenerating power harvested from the braking system. 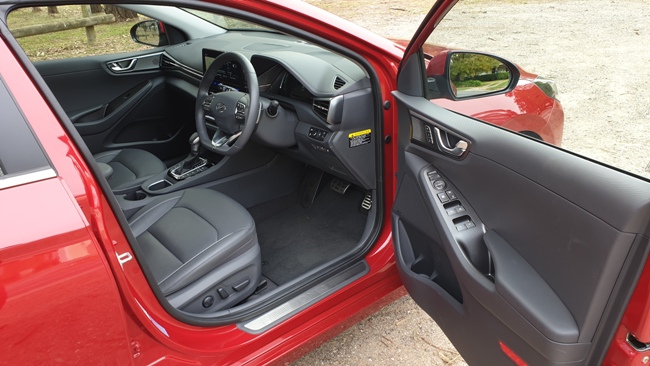 Front and rear rows each feature a pair of cupholders and each door has bottle holders, plus the rear seats have a centre armrest that folds out.

On The Road It’s: Not quite the whipcracking performance expected. The Dual Clutch Auto feels more like a CVT, a constant variable transmission, and comes across as the same when driving. There’s even no typical DCT lag when going from Drive to Reverse and back. It’s sluggish, swallowing power just as a CVT does. However, the integration of petrol and battery on the drive is seamless.

Gentle acceleration has the pair working together nicely, if slowly, whereas a hard shove of the throttle brings more life but still not as zippy as expected. In context, Toyota’s Corolla, the most logical competitor, sees a better and quicker response due to the slightly different CVT fitted. Unlike the Corolla and indeed Toyota’s hybrid system where the electric engine cuts in at 20kph even with EV Mode selected, the Ioniq’s system is more battery oriented. It really only switches to the petrol when that extra urge is needed or when the battery is well down on charge.

The petrol engine winds up easily and it’s a quiet unit to boot. Although actual drive response may seem slowish the pedal does elicit a quick response from the engine itself, making it a willing revver. The whole package is super quiet too, even on the coarser chip tarmac roads.

The Ioniq has two drive modes as such too, and both are to do with how the engines work. HEV or Hybrid are the two modes and one, HEV, charges the battery system on the go. The touchscreen display also shows the various ranges and charge levels as the Ioniq goes about its business.

Ride quality is on the taut side for the Ioniq Premium PHEV. Driven on the freeway it flattens out the usual imperfections well enough, but hit some of the road joins and it’s a bit more bang crash. It rides as if the compliance is more on the bottom end and compresses a little too quickly otherwise. The rear is a multi-link setup which for the most part ensures the grip levels are high, but it will skip occasionally on corners with road joins.

What About Warranty And Service?: Hyundai offers a pre-paid service plan. Warranty is five years and unlimited kilometres and the battery in each model has eight years or 160,000 kilometres.

At The End Of The Drive. It’s a solid if unspectacular performance from the Ioniq PHEV. It’s got enough to titillate the technical and eco minded, enough Hyundai-ish to make it relatable to the family, unlike the overblown and overdone Kona Electric, and drives well enough to not frighten people unfamiliar with the technology. But buyers of this would be familiar enough anyway. Here is where you can find out more.