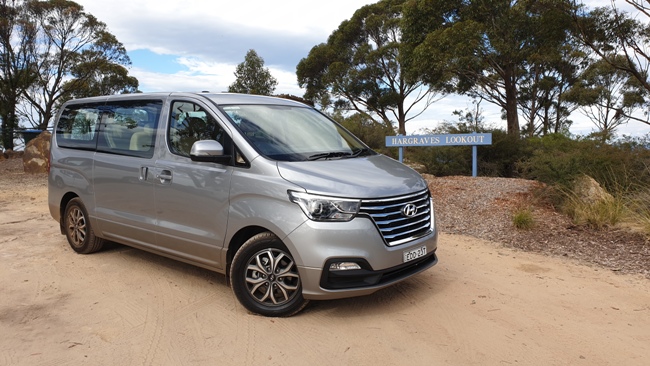 This Car Review Is About: The passenger version of Hyundai’s durable iLoad commercial van is called iMax. There’s a pair of normal doors up front, a pair of sliding doors on the sides, and a rear horizontally hinged door. It’s exclusively diesel and auto for the drive-train, and in the Elite has eight leather covered seats.

How Much Does It Cost?: Hyundai’s website lists the iMax Elite as $48,990 driveaway as of April 2020. That’s with a Creamy White exterior. Go for Timeless Black, Hyper Metallic, and Moonlight Cloud (silver and blue), it’s $49,685 drive-away. 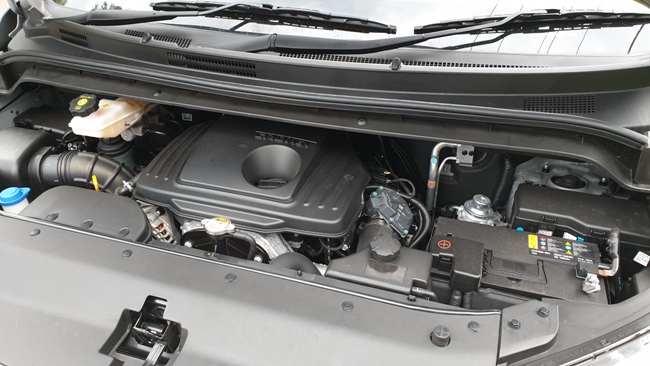 Under The Bonnet Is: 441Nm of torque, and they’re on tap between 2,000rpm and 2,500rpm. The auto is a super smooth five speed unit, and although seemingly needing a cog or two extra, still manages to deliver a figure of that Hyundai quotes as 8.8L/100km for the combined cycle. Otherwise they quote 11.2L/100km for the urban, and 7.3L/100km on the highway, a figure where a seven or eight speed transmission would help. Considering a starting weight of 2,135kg and a GVM (Gross Vehicle Mass) of 3,030kg, it’s a sterling effort however. Tank size is 75L. By the way, it’s a rear wheel driven beastie. Twing is rated up to 1,500kg braked.

On the Outside It’s: A van. But having four colours and not just a fridge white makes a difference. Contrasting panels low down bring a subtle two-tone experience visually. There are also 215/65/17 alloys and Hankook Ventra LT tyres, with the wheels looking more like they should be on something a little more sporting oriented. The sliding doors have pop-out, not sliding windows. Up front it’s a more modern look for the grille and headlight cluster, and there are driving lights set low down in the bumper.

Overall length is 5,150mm, with width and height providing a reason why vans are described as boxy at 1,920mm and 1,925mm respectively. The sliding doors are manually operated, not powered, nor is the rear door powered. The washer fluid jets spray in three thin jets and could use more pressure.

The centre row seats have the familiar front mounted pull-rod in order to slide them, and a manual handle down on the side to fold. This allows easier access to the third row seats. Behind them is over 800L of cargo space, so for a family, plenty of room for a pram, bags, shopping, etc. 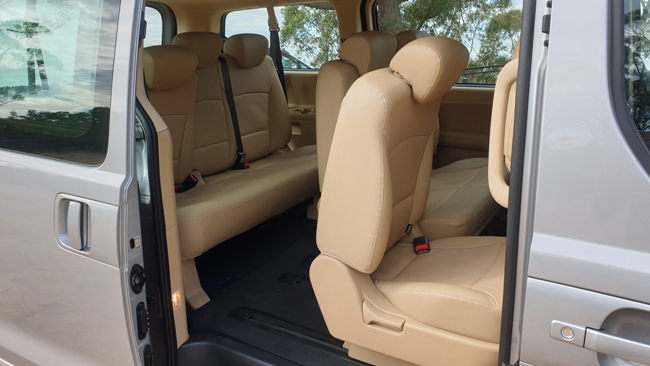 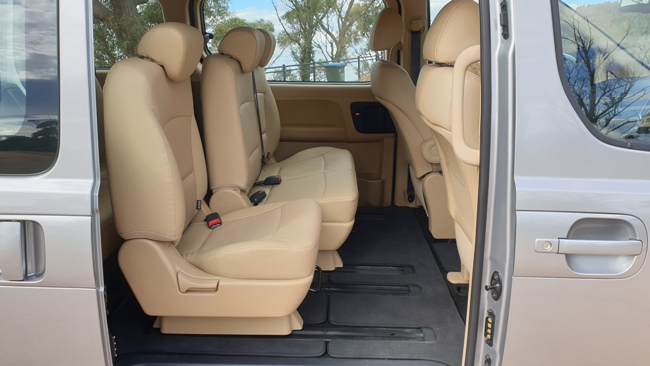 The driver’s dash display betrays the commercial origins, and oddly even down to not showing fuel usage nor a Trip B display. It’s a very basic speedo dial, rev counter, and fuel setup, and could really benefit from a higher class look.

Auxiliaries in the form of heat seating and venting, rear seat aircon controls, and USB port are found in the centre console, along with a pull out cup holder. There is, though, no dedicated space to hold a phone, even allowing for a shallow cavity up top. Audio via the basic Hyundai family 7.0 inch touchscreen is AM/FM only with no DAB, and again something that should be a little more upmarket by having that as standard. But there are apps for the smartphone access and Bluetooth for streaming.

On The Road It’s: Very quiet, even under load. The iMax Elite hums along with little fanfare being drawn to it. It simply gets up, gets ready, gets going. It’s mightily smooth in the way it rides and handles, but the high up seating position and cargo-van softness in the suspension, plus the dual purpose tyres, mean some corners are, by necessity, taken at a slower speed that most other vehicles.

The five speed auto, even allowing for the fact it’s only a five-cogger, is superb. It is as smooth as you can get in changing ratios up and down. This applies as equally to flat highway runs as it does to climbing or descending sloping roads. There is a manual shift option via the gear selector but that was ignored purely because the ‘box does such a good job on its own.

There’s a bare minimum of turbo-lag from the get go. The maximum torque is pretty much where highway velocities have the revs rolling to provide it, which means a gentle press of the go pedal, that silken drop back a cog or two, and access to 441 torques is there. The lack of turbo-lag helps too, as it means less effort and time waiting for the engine to deliver helps in the overall driving presentation.

The steering is in the Goldilocks zone; it’s not too heavy, not too light. This makes for three point turns on a suburban street, or in a loading zone much easier to deal with. It also made our excursion to a Blue Mountains lookout for a couple of photos via a gravel road as comfortable and unfussed as it should be. No bump steer, no tramlining in the gravel and mud, and a pose with Jessie and Nelson, (two local equine residents that gave the iMax Elite the hoof of approval), which was set up by reversing twenty metres or so, simple due to the just-right feel.

The brakes could do with some more bite and feedback though. There just wasn’t as much coming through from the pedal to state with certainty that the pressure being put down was gripping the discs as much as they could be. Ride quality is good enough, considering the iMax’s origins and the MacPherson strut/live five link rear axle.

What About Safety?: Hmmm….could be better. The spec sheet says side and front airbags for the driver and front passenger. It doesn’t say side/curtain airbags though. It’s rated as four stars by ANCAP. The second and third row seats all have adjustable head rest heights and the second row has ISOFIX mounts. 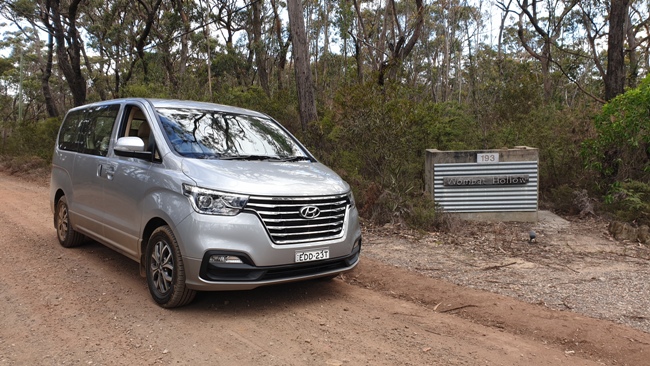 Servicing information may vary so contact your Hyundai dealership.

At the End Of The Drive. The old saying, “for what it is” applies to the Hyundai iMax Elite. It’s a people mover that is based on a light commercial vehicle. That needs to be taken into consideration. So, for what it is, it’s ok. It’s not possibly what it could be, but for what it is, it does well enough.Given it’s a sub-50K vehicle, a few extra touches would still have it well competitive in price and lift the overall appeal, perhaps just enough, to make a little bit more of a dent in SUVs that cost more and do much of the same role.

Check it out in more detail here.